Many people know Lenny Kaye as a guitarist and composer with the Patti Smith Group.  I have seen him play with Patti Smith four or five times in the past few years. I love his style and his gentle enthusiasm.

Lenny Kaye is lesser known but greatly respected as a music journalist. He has a powerful writing command  that makes him one of America’s leading music analysts and interpreters.

Lenny began by writing reviews for Jazz and Pop magazine. He later branched out to foundation rock magazines like Fusion, Crawdaddy and Rolling Stone. He next became the music editor for Cavalier, a gentlemen’s magazine.where he authored a monthly column until 1975.

He then decided to become a free-lance writer where he would a wrote for hire with a range of publications that included Melody Maker and CREEM. Again he served in an editor role for music monthly magazines like Rock Scene and Hit Parader through the seventies.

Lenny Kaye has written with an authoritative sense about several defining periods in the history of music.

One literature work that represents his history/analysis writing skills is You Call It Madness: The Sensuous Song of the Croon. This book  highlights the age of crooning in early 1930s New York City. The book centers on Russ Columbo, known as Bing Crosby’s rival. Lenny Kaye as a Columbo enthusiast offers the reader a scrapbook research title accompanied by many rare photographs and memorabilia from his own collection. 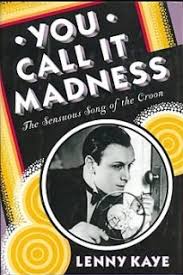 I would be remiss if I didn’t mention Nuggets about the first psychedelic era which celebrated its 40th anniversary last year. Lenny Kaye wrote the liner notes and helped assemble the collection with Jac Holzman of Elektra Records fame. I purchased that edition for Lenny Kaye to autograph for me someday in the future 😉

You can find monthly writing contributions from Lenny Kaye at e-Music where he writes for them today. Here are some of his 2012 writing efforts.

I have long admired Jimmy Webb as a singer and song writer. You know his songs well. They live in your heart and blossom like flowers whenever you require them. He has written such masterpieces as By The Time I Get To Phonenix, Wichita Lineman, Galveston, Up, Up and Away, MacArthur’s Park, Didn’t We and All I Know.

We recently saw Jimmy Webb perform at Infinity Music Hall in Norfolk, CT. It was a delightful evening of songs played on the piano, accompanied by the personal remembrances of Mr. Jimmy Webb. He shared his memories openly about such friends as The Outlaws (Willie Nelson, Johnny Cash,Kris Kristofferson and Waylon Jennings) which preceded the song, Highwayman. Jimmy Webb is a very accomplished piano player, which adds a powerful dimension to his on-stage presence. He made Infinity Music Hall feel like his living room. He was very taken with the venue, which always has an engaging ambiance. His stories charmed us as he spoke with warmth and great aplomb about Harry Nilsson, Frank Sinatra and our personal favorite friendship, Richard Harris.

You can hear some of those stories on Jimmy Webb’s recording, Live and at Large.

After an energetic and soulful two hour concert, Jimmy Webb met with his fans in the lobby, signing autographs and posing for pictures. He told me he really liked Santana, which made me smile 🙂

Jimmy Webb has released a new collaboration recording Just Across The River last week. It was recorded over a two day interval in Nashville. The collaborations with esteemed friends includes Billy Joel (Wichita Lineman), Jackson Browne (P.F. Sloan), All I Know (Linda Rondstadt), If You See Me Getting Smaller (Willie Nelson), Galveston (Lucinda Williams), and By The Time I Get to Phoenix (Glen Campbell) just to name a few :). The recording flows evenly as each new texture of Jimmy Webb’s musical tapestry unfolds before our sensibilities. You can learn more about this special collaboration recording, Just Across The River on Jimmy Webb’s Web site.

Its great to see the resurgence in Jimmy Webb’s musical career. He richly deserves the praise he is receiving in the press and music community for this collaborative effort, Just Across The River.