Today’s blog post is inspired from a photograph that captures the inherent joy evident inside the music of our hearts. Standing together these musical legends are joined in common bond of the Moog synthesizer and music composition.

The Grandmasters pictured below from left to right are Maestro Sachio Fujioka, Takashi Yoshimatsu, Isao Tomita, and Keith Emerson. This conclave of wizards took place at the Orchestral “Tarkus” Concert in Tokyo.

Keith Emerson attended the Tokyo Philharmonic Orchestra‘s performance of “Tarkus” in Tokyo on March 20th, 2013 to celebrate the 60th birthday of a renowned composer, Mr. Takashi Yoshimatsu, who arranged “Tarkus”. His arrangement was used on the weekly epic drama on national TV station, “Tairano Kiyomori” in Japan last year. This will be the first time Keith hears this particular version of orchestral “Tarkus” performed live by a full orchestra.

The concert was held at Tokyo Opera City Concert Hall on March 20, 2013

This is a fantastic composition performed by the Tokyo Philharmonic Orchestra. Takashi Yoshimatsu has extended Tarkus creating a further masterpiece in the process.

Should you wish to listen to the original work Tarkus by Emerson, Lake and Palmer I strongly urge you to avail yourself of the Deluxe Edition. It has been remastered by yet another wizard of progressive rock, Steven Wilson. Listen to it in 5.1 surround sound.

This is my signed copy of the original audio CD by Carl Palmer.

This Grandmaster’s photograph has also rekindled my interest in Tomita. I listened happily today to his classic recording, Snowflakes Are Dancing. I was reminded how picturesque and poetic Tomita’s Moog synthesizer compositions are to the music of our heart. One of the great treasures of all time is Isao Tomita.

I still hold out hope that I may one day witness Kitaro live in concert. 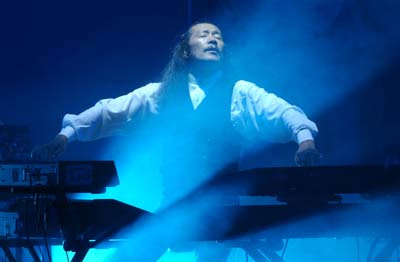 Here is a video of Kitaro performing live in Tokyo in 2009.