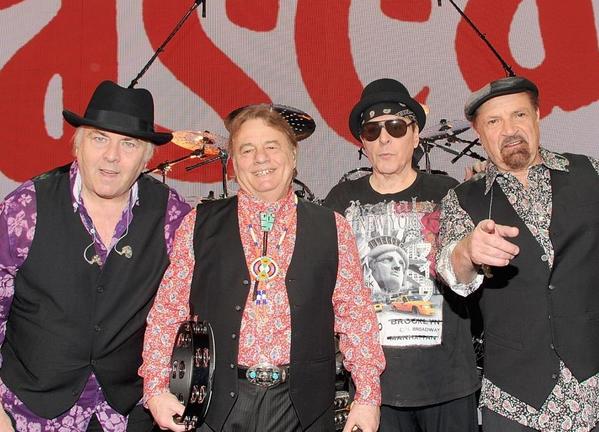 The David Chase flim (Creator of the Sopranos), Not Fade Away speaks to the teen spirit inside us that rock and roll sets free. I love the soundtrack and what the trailer says to the rebel spirit ever-present in the music of our heart. It doesn’t hurt either that  the Executive Producer is Steven Van Zandt.;)

Hope to see this movie soon…

I an trying to wrap my mind around The Rascals multimedia event, Once Upon A Dream, that Rosemary and I saw last night as we returned to The Capitol Theatre in Portchester, NY. It’s a blog post I want to do justice to so I can’t publish it yet, but trust me I will as soon as I get the proper time to write my thoughts and observations.

In the meantime let me whet your appetite for The Rascals live. There were many highlights last night. The high point for me was seeing Eddie Brigati sing, “How Can I Be Sure”.

Here is a YouTube video of Eddie Brigati at BB King’s Club in NYC. I just love the adoration Kate Taylor shows him as a fan and fellow musician. What’s even cooler is that he invites his wife up and his brother David Brigati to sing background vocals with him. I never realized until I began to research The Rascals how important David Brigati was to The Rascals sessions.

The video gets even better after Eddie sings, “How Can I Be Sure”. Jimmie Vivino who is playing piano asks Gene Cornish to come up and he plays harmonica as they do “Groovin”. What an out a site session!

Steven Van Zandt and his wife Maureen have produced a wonderful, nostalgic musical in Once Upon A Dream. Their love of The Rascals is evident through out the production.

Please enjoy for now Little Steven’s induction of The Rascals into the Rock and Roll Hall of Fame (1997) and their subsequent performance. It will give you a taste of what we lovingly experienced last night 🙂

My wife and I were listening to Cousin Brucie’s Saturday Rock and Roll Party on SiriusXM Satellite Radio this past Saturday night. We were blown away by the live announcement Gene Cornish made during the broadcast. The Rascals, all four original members, Eddie Brigati, Felix Cavaliere, Gene Cornish, and Dino Danelli would be reuniting for three special concerts December 13, 14, and 15 at The Capitol Theatre in Portchester, New York. Let me tell you cousins this is fantastic concert news!

Tickets go on sale Friday I hope I can score two tickets to this event. We’d love to see The Rascals Live 🙂

Miami Steve Van Zandt announced a Kickstarter crowd-funding project for The Rascals yesterday. “Once Upon A Dream” is a combination concert/theatrical event produced and directed by Steven Van Zandt and lighting/projection wizard Marc Brickman.

I applaud what Miami Steve has done here and how it allows us Rascals fans a chance to take part and support the production. I just have to figure out what option I am going to pledge 😉

In addition to the concert experience, the history of The Rascals, and the history of the ‘60’s through their music, will be dramatized by a combination of narration, filmed scenes of actors acting out key moments in the band’s history, news footage, and archival footage of the band.

There will elements of the staging and light design never seen before just as Marc Brickman has done in his earlier groundbreaking work with Bruce Springsteen, Pink Floyd, Paul McCartney, Blue Man Group, the Olympics, and Roger Waters’ recent ‘The Wall’ tour..

When I began record collecting in 1966 my focus was to own every Rascals vinyl LP as they became available. They have been the foundation of my music collection these past 46 years.

Gene Cornish autographed their first album The Young Rascals for me a couple of years ago at a Beatles Convention in Stamford, Ct. I’d love to get the rest of the group to sign this LP 😉