I have long admired Jimmy Webb as a singer and song writer. You know his songs well. They live in your heart and blossom like flowers whenever you require them. He has written such masterpieces as By The Time I Get To Phonenix, Wichita Lineman, Galveston, Up, Up and Away, MacArthur’s Park, Didn’t We and All I Know.

We recently saw Jimmy Webb perform at Infinity Music Hall in Norfolk, CT. It was a delightful evening of songs played on the piano, accompanied by the personal remembrances of Mr. Jimmy Webb. He shared his memories openly about such friends as The Outlaws (Willie Nelson, Johnny Cash,Kris Kristofferson and Waylon Jennings) which preceded the song, Highwayman. Jimmy Webb is a very accomplished piano player, which adds a powerful dimension to his on-stage presence. He made Infinity Music Hall feel like his living room. He was very taken with the venue, which always has an engaging ambiance. His stories charmed us as he spoke with warmth and great aplomb about Harry Nilsson, Frank Sinatra and our personal favorite friendship, Richard Harris. 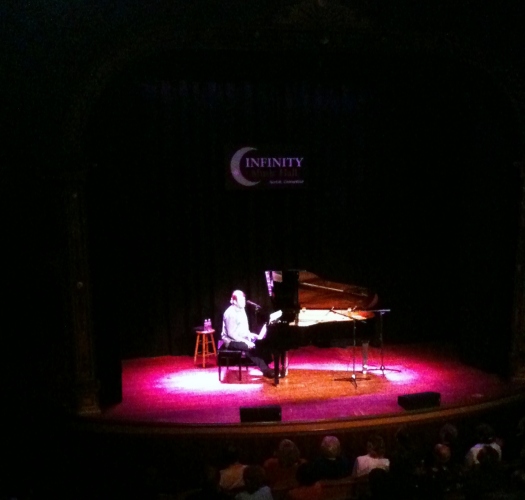 You can hear some of those stories on Jimmy Webb’s recording, Live and at Large.

After an energetic and soulful two hour concert, Jimmy Webb met with his fans in the lobby, signing autographs and posing for pictures. He told me he really liked Santana, which made me smile 🙂

Jimmy Webb has released a new collaboration recording Just Across The River last week. It was recorded over a two day interval in Nashville. The collaborations with esteemed friends includes Billy Joel (Wichita Lineman), Jackson Browne (P.F. Sloan), All I Know (Linda Rondstadt), If You See Me Getting Smaller (Willie Nelson), Galveston (Lucinda Williams), and By The Time I Get to Phoenix (Glen Campbell) just to name a few :). The recording flows evenly as each new texture of Jimmy Webb’s musical tapestry unfolds before our sensibilities. You can learn more about this special collaboration recording, Just Across The River on Jimmy Webb’s Web site.

Its great to see the resurgence in Jimmy Webb’s musical career. He richly deserves the praise he is receiving in the press and music community for this collaborative effort, Just Across The River.