Take a look at this tweet from St. Vincent and W Hotels about an innovative lodging experience.

This is a smart idea for music artists who awaken with a creative idea and wish to capture it after a good night’s rest. Imagine walking out of your room, padding down the hall to record the song that echoes inside of you. Note the scenic view the artist can get lost in right outside their window. How’s that for ambiance and inspiration?

I wonder what the cost of a Sound Suite session might be? Thinking I need to take some voice lessons first 🙂

W Hotels gets added to my list of Seattle comforts.

Spellbinder’s cohesive experimental latin jazz forms a symbiotic relationship with the listener. Your musical tastebuds will acquire abundant sensory pleasure. Then be prepared to be transported to an expansive audio gallery.

I enjoy the democratic balance each musician contributes as they take their logical turn weaving a well-constructed audio tapestry.

The band echoes the  Miles Davis Electric period at times (“Bridge The Gap”). I hear strong references to Stuff (“I Don’t Believe You”) a New York City-based jazz-funk band active in the late 1970s and early 1980s.

But make no mistake about how Spellbinder has branded its own unique sound. We had the good fortune six years ago to witness Spellbinder live at a club, ToST in the Fremont neighborhood of Seattle, Washington. I was impressed that night with how tight and rhythmic the band played. The maturity that Spellbinder evidences since is well-established throughout the eleven tracks.

If you love jazz-fusion or any form of experimental jazz you owe it yourself to add  Michael Shrieve’s Spellbinder to your collection.

Today, April 29, 2014 is the Jimi Hendrix Park Foundation Day of Giving. I have a deep affinity for Jimi Hendrix. I was my honored to give to this worthy cause.

Inspired by the music, life and legacy of our own “West Coast Seattle Boy,” Jimi Hendrix Park will be a unique gathering place for the entire community.

Stand together with local community leaders to help shape the future of Jimi Hendrix Park.

We hear a lot about The Rock and Roll Hall of Fame as “The” museum for music in the United States. Last week was the 2014 Induction Ceremony at the Barclay Center in Brooklyn, NY.

However my favorite American music museum is the EMP Museum in Seattle, Washington. I have been a member since 2009. We have visited EMP twice in our travels.

It’s unfortunate that our 2014 vacation plans don’t include Seattle this year. I would loved to have attended the EMP Pop Conference.

We turn to music to put the world in motion. From communication by talking drum to sounds streamed off mobile phones, music has accompanied the movement of people, alleviated work, and pulsated leisure. This year’s EMP Pop Conference, back in Seattle after three years roaming, offers more than 100 presentations exploring the subject of music and mobility.

I find the schedule for the EMP Pop Conference 2014 more esoteric than ever. The session that interests me the most is:

The Oxford Handbook of Mobile Music Studies(2014) is a two-volume publication featuring almost fifty scholars that consolidates a new research subfield. This roundtable includes the Handbook’s editors and additional contributors, with presentations analyzing the field itself and examples such as mobile music marketing in Brazil, iPod/iPhone DJing, online radio in the US versus Japan, and the automotive aesthetics of “G-Funk” recordings.

Seattle is our second favorite city after New York City. I have been there twelve times. I started visiting Seattle when I worked for Microsoft in 1992. My wife and I adore the city especially the topography and the Four Seasons Hotel. The arts scene there is vibrant and embracing.

Bumbershoot: Seattle’s Music and Arts Festival will be hosting a gangbuster Bumbershoot 2013. Take a look at the lineup below and then navigate to the Bumbershoot Website to increase your knowledge about this way cool event.

Bumbershoot takes place at the Seattle Center which is complete with a Monorail system, the Space Needle and the Experience Music Project. I find this spot reminiscent of the New York Worlds Fair site.

Adding Bumbershoot 2013 as a strong possible to the wish list in the music of our heart.

The Experience Music Project (EMP) Pop Conference in 2013 will be a five city live streaming event. The five easy pieces for Pop Conference 2013 will take place in Seattle (Central site), New York (the site of the 2012 Pop Conference that we attended), Los Angeles, New Orleans and Cleveland.  Please refer to the EMP Pop Conference page for more specifics, as the event is just unfolding.

Five different gatherings, in the East, West, South, Midwest, and Pacific Northwest, will take place on the same weekend, with a goal of live streaming the content for those unable to travel and preserving it for posterity. At each location, there will be one panel at a given time, rather than concurrent sessions, to foster regional community.

Local organizers, all veteran conference participants, will steer the program for each Pop Conference city: Oliver Wang of Cal-State Long Beach in Los Angeles (working with the USC Dornsife Center for Feminist Research, directed by Karen Tongson); Tavia Nyong’o of NYU in New York (working with the Clive Davis Institute of Recorded Music); Joel Dinerstein of Tulane in New Orleans (working with the New Orleans Center for the Gulf South); Lauren Onkey of the Rock and Roll Hall of Fame and Museum in Cleveland; and Jasen Emmons of EMP Museum in Seattle.

My aim as an EMP/SFM Member(since 2009) is to increase my Pop Conference involvement in 2013 from the attendee level in 2012. I’m glad the NYU event is open-ended. I have contacted Tavia Nyong’o of NYU to learn more about where I can hopefully take part.

I have a better idea now why Robert Christgau calls the Pop Conference,  “the best thing that’s ever happened to serious consideration of pop music.” I attended the session where he spoke last year (Refer to my blog post about Pop Conference 2012 here)

I look forward to the EMP Pop Conference 2013. I plan to update readers about this event moving forward. When I’m informed you will be informed, so stay tuned 🙂

King Animal will be available as a Box Set, a Deluxe CD,  and 180 gram double vinyl. View and pre-order all the deluxe editions at www.soundgardenworld.com.

Soundgarden is back with their first album in over a decade and band members Kim Thayil and Matt Cameron premiere ‘King Animal’ on Sirius XM’s Pearl Jam Radio. Pearl Jam guitarists Mike McCready and Stone Gossard celebrate the occasion and sit down with the Soundgarden members to discuss the band’s beginnings in Seattle, how their unique sound was born and what it was like to be back in the studio to record their newest album.

Twenty years ago this summer I was working for Microsoft Corporation. I experienced Seattle, Washington as a beautiful sprawling metropolis for the first time in the fall of 1992. Little did I realize it would become the most visited city (exclusive of New York City) I would travel to and cherish in the United States. I have been to Seattle 14 times in the past 20 years. Seattle is an exciting and vibrant place to experience. I developed an affinity for Pearl Jam that year as their album, Ten was gaining momentum in parallel to my new career. The city was living and breathing a unique music art form that Pearl Jam, Nirvana, and Soundgarden were evidencing to the world.

I love travelling back to Seattle and visiting the Experience Music  Project, a Rock and Roll Museum in Seattle Center, next to the Space Needle and Seattle Center Monorail. The architecture of the building is amazing. The exhibits give extensive information about the Seattle music scene. It cements the understanding and the linkage Seattle, Washington has with rock music history. We are members of this museum and love the affinity we have with the art and pop culture it expounds. 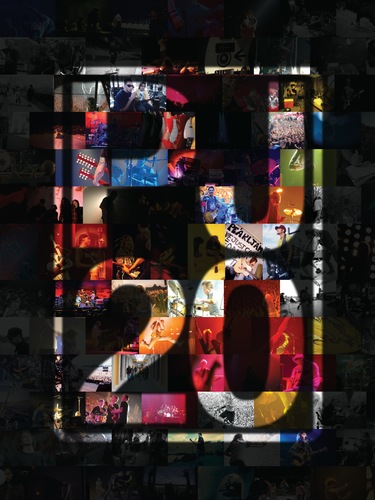 I have spent time with the music and history of Pearl Jam. We had intended to attend the premier of the Cameron Crowe documentary Pearl Jam Twenty but Snowtober disrupted our plans by knocking out the power to the theater in our market. Biding my time I took advantage of my Barnes & Noble Christmas gift card that my loving wife gave me. I purchased the Pearl Jam Twenty book(at a 60% discount!) and the companion DVD. This will be my weekend music sojourn. I look forward to digging in deep to learn more about the musical evolution of Pearl Jam and the music of related groups in Seattle.