The Rolling Stones have long been supporters of the Blues from before the start of their career right through to their latest album, Blue & Lonesome which featured their interpretations of the classics, many of which appear in their original versions here on Confessin’ The Blues.

Mick Jagger was an early fan of the Blues: “The first Muddy Waters album that was really popular was Muddy Waters at Newport, which was the first album I ever bought”.

Confessin’ The Blues collects together the greatest bluesmen ever and provides a perfect education to the genre. The tracklisting on the various formats have been chosen by The Rolling Stones, in collaboration with BMG and Universal and will be released on BMG on November 9.

“If you don’t know the blues… there’s no point in picking up the guitar and playing rock and roll or any other form of popular music.” – Keith Richards

The band has decided that 10% of BMG’s net receipts* from the sale of this album will be donated to Willie Dixon’s Blues Heaven Foundation (A registered  US 501 (c) (3) non-profit organization).

Ronnie Wood says: “That’s how Mick and Keith first got close as well, on the train coming back from college. They noticed each other’s record collection and it was, “Hey, you’ve got Muddy Waters. You must be a good guy, let’s form a band”. 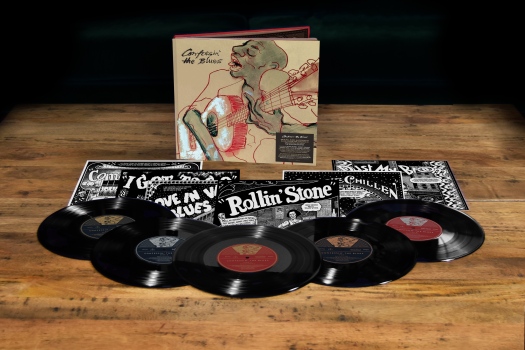 Confessin’ the Blues is available to pre-order in several formats, including a two-CD set, a double LP vinyl set, and a special vinyl book pack meant to mimic the original packaging of 78 rpm records. All versions will come with liner notes from music journalist Colin Larkin, while the book pack will feature removable card prints featuring drawings by blues illustrator Christoph Mueller.

This film traces Jeff Beck‘s music and career throughout the 1960s – his formative influences and early groups, his work with The Yardbirds, his brief, bizarre reinvention by producer Mickie Most as a solo pop star, and the first, radical incarnation of the Jeff Beck Group, during which he played alongside vocalist Rod Stewart and second guitarist Ron Wood. Featuring a plethora of rare performance and studio footage, exclusive interviews, contributions from those who worked with and alongside Jeff during this period and a host of other features, all of which combine to make this documentary – the first yet to singularly focus on Beck’s career – a legitimate tribute and enthralling history of this often underrated musician, writer and performer.

I was awakened at 2 a.m. this morning to an intimate blues get together broadcast on PBS Channel 13. The show starred Muddy Waters at Buddy Guy’s Checkerboard Lounge on the South Side of Chicago. The show was filmed on November 22, 1981 (31 years ago). The Rolling Stones had stopped by to gig and see their friend and hero Muddy Waters.

They are accompanied onstage by such blues luminaries as Junior Wells on vocals and harp, Buddy Guy and Lefty Dizz on blues guitar. Mick Jagger, Keith Richards and Ronnie Wood were like three sons returning home to see their Father at Thanksgiving time. Muddy seemed really happy to have his children by his side.

The club was very small. I watched in amazement as Keith Richards and Ronnie Wood climbed on top of the tables and took the stage. Muddy Waters was in great form performing many of his blues classics. Mick Jagger sang along with total reverence for Muddy and his infamous blues songs.

The highlight for me was “Champagne and Reefer”. I love the scene where Muddy Waters is handed a marijuana stalk with fresh green buds. He just laughs as we all do at that point 😉

Gimme champagne when I get thirsty

Gimme a reefer when I want to get high

I must get this CD/DVD set. I so love and miss Muddy Waters :). I am so thankful this historic occasion is captured on film for us to relive and enjoy.

The first ever official Rolling Stones app is now available on iPhone, iPad and iPod Touch. It’s free to download and there’s get exclusive content, first access to breaking news about the band, as well as the chance to win tickets to the upcoming gigs.

You can also unlock access to never-before seen interviews, gig performances and much more – only available in the app

I was recently asked, “What’s the best concert you’ve ever been to?”. I have been debating that question within for the past few days.

I have attended 381+ concerts in 43 years. I am still fact checking that number 😉 because it’s probably been even more shows than that. It’s a tough question because I have seen some great concerts and musicians over the decades, Led Zeppelin, Paul McCartney, Santana, U2, Metallica (the last two listed in the same night…) to just name a few.

I have to say the best concert I’ve ever been to was The Rolling Stones at Madison Square Garden on June 25th, 1975. 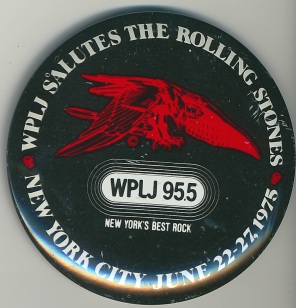 There is an electricity, an excitement that the Stones create that is unequaled by any other band. They exceed the claim they are the “World’s Greatest Rock and Roll Band.”. I am sure some might argue with that title . I’m open to hearing your opinion but only if you have seen the Rolling Stones will I entertain that discussion.

There are several reasons why the Stones in ’75 was the best concert I’ve ever been to see. The first was the adventure we had that night. I bought the tickets for this event by standing in line at Ticketmaster. The show sold out in record time and I got nose bleed seats at the Garden. By the time the night was over we were on the floor of MSG. We had so much fun eluding the ushers and finding unoccupied seats on various levels of the Garden. Each time we moved down a level the music and crowd intensified for us.

The second reason was how good The Rolling Stones were collectively. The stage started as a star folded up like an unblossomed flower. Keith Richards rang out the licks of Honky Tonk Women as he pushed the star edge down to reach the fans. He sounded sharp, brilliant as he played his guitar in a low slung fashion.

Mick Jagger was the rooster on acid, prancing about in his full body white sequinned costume. He implored us to love him and we did with every word he sang for us. Jagger put on quite the show, at one point he was added to a trapeze and flew out over the audience at us. Another time he rode an inflated dragon that spat confetti at us.

Bill Wyman and Charlie Watts held down the rhythm section. I was very impressed with Charlie’s drumming skills. He played that drop down beat on “Gimme Shelter” with all his strength.

It was a real coup to get tickets to see them that year. The luck of the draw for seats was the fact that they played the Garden six nights straight, which increased chances for a seat. I think its going to be next to impossible to see their 50th Reunion Tour, but we’ll certainly try to get to one of their concerts.

Watch this video clip of the forthcoming Rolling Stones documentary, Crossfire Hurricane and tell me you don’t feel the charisma they generate 😉