There are various locales that represent important music genres in the United States. I’ve been fortunate to visit New York City (infamous for Jazz), Cleveland’s Rock and Roll Hall of Fame, and Beale Street in Memphis, Tennessee (representing the Blues).

I recently wrote about the National Blues Museum in St. Louis being another step in the music journey.

The San Francisco Music Hall of Fame is in the design stage and will offer a stroll through the history of some of the most influential music of our time. In the halls of Music City you’ll revisit the San Francisco Sound, the Summer of Love, the Grateful Dead, Jefferson Airplane, Creedence Clearwater Revival, Janis Joplin, Sly Stone, Santana, Janis Joplin, and so much more.

Classic photography, concert-played instruments, vintage posters, and an ever-changing display of memorabilia is blended with modern interpretations of the music of the Bay Area to bring you a glimpse like no other into the classic rock era.

Installed in the sidewalk in front of Music City SF at 1353 Bush Street, over 330 intricately connected, engraved bricks, embedded in the sidewalk of the Music City SF building, honors local legends, including many who may never received national recognition, for their place in the rich, diverse and creative musical and cultural movements of the San Francisco Scene.

The Music City SF Walk of Fame celebrates the personalities, places and events that make up the community heritage of The City and the SF Bay Area.  From Beat Poets to the San Francisco Sound explosion of the late 1960’s to the artists of today will be enshrined. The continuous story is told brick-to-brick, section to section of the times, places, artists and performers.

Stay tuned for grand opening dates and other exciting announcements.

This film traces Jeff Beck‘s music and career throughout the 1960s – his formative influences and early groups, his work with The Yardbirds, his brief, bizarre reinvention by producer Mickie Most as a solo pop star, and the first, radical incarnation of the Jeff Beck Group, during which he played alongside vocalist Rod Stewart and second guitarist Ron Wood. Featuring a plethora of rare performance and studio footage, exclusive interviews, contributions from those who worked with and alongside Jeff during this period and a host of other features, all of which combine to make this documentary – the first yet to singularly focus on Beck’s career – a legitimate tribute and enthralling history of this often underrated musician, writer and performer.

I am thankful to have seen Metallica perform, “Enter Sandman” at the 25th Anniversary Rock & Roll Hall of Fame Concerts, October 30, 2009. They really raised the roof that night. Such raw, powerful energy. It is their signature song.

I loved the footage of NY Yankees Mariano Rivera running out from the bullpen in centerfield at Yankee Stadium behind them as they played Classic.

Uncut Magazine has an article about “The Making of…Metallica’s Enter Sandman”.

A new documentary about the making of Bruce Springsteen‘s latest album will air on HBO next month, a few days before his group the E Street Band receive a special award at the Rock and Roll Hall of Fame.

The half-hour film, Bruce Springsteen’s High Hopes, will detail the making of the singer-songwriter’s most recent record, High Hopes, which came out earlier this year and debuted at Number One in 20 countries. The film, which premieres April 4th at 9:30 p.m. EST, will feature scenes of studio sessions, rehearsals and interviews with Springsteen and his High Hopescollaborator, Rage Against the Machine guitarist Tom Morello, according to The Hollywood Reporter.

I’ve been viewing the ultimate collection box set, Here Come The Nice, The Immediate Years 1967-1969 from The Small Faces. Box sets always fascinate me from on a content, design and merchandise basis. The purpose of this limited edition (3,000 signed copies) is to commemorate the Small Faces recent induction into the Rock and Roll Hall of Fame.

My reaction to the Small Faces box set was positive as I watched Kenny Jones breakdown the merchandising elements I felt compelled to buy one of these sets, (Amazon U.S. $152.90).

“It’s all so beautiful”

Holly George-Warren personifies the admirable place of music industry subject matter authority. She has the right mix of multifaceted skills that when combined or executed singularly create demand for her ability. According to her biography, Holly George-Warren is an award-winning writer, editor, book packager, producer, and music consultant.  If that’s not enough for you she teaches Arts Journalism at the State University of New York in New Paltz, NY and has lectured at the Clive Davis Institute of Recorded Music at New York University. She has guest lectured at Cornell, Penn, MTSU and CUNY, among other universities.

I am especially taken with how she embodies her knowledge when it comes to American cultural fashion. She has served as a consultant, writer, and/​or lecturer on Western wear at several museums, including the National Cowgirl Museum and Hall of Fame, the Autry Museum of the American West, the National Cowboy Museum and Hall of Fame, the Bob Bullock Texas History Museum, and the Frist Center for the Visual Arts. So its safe to say she looks and acts the part 😉

I learn more readily why she was chosen to co-write the book John Varvatos: Rock In Fashion (with John Varvatos, projected availability September 2013). One of these days I am going to own a John Varvatos ensemble. This book will be invaluable in helping to choose that desired wardrobe item.

I am eager for another book Holly George-Warren is now authoring the biography of Alex Chilton, to be published by Viking Press in 2014. I know she will write with diligence and just the right amount of revelation necessary to tell his story to the world.

I own three of  the many books she has written.  The first book, The Road to Woodstock is an autographed hardcover that Holly George-Warren signed in person at the Morrison Hotel Gallery Woodstock 40th Anniversary Event (The book was also signed that evening by co-writer Micheal Lang, Woodstock co-creator, Henry Diltz, “Official” Woodstock photographer (Founder of Morrison Hotel Gallery) and John B. Sebastian, the performer featured on the cover).

If I have peaked your interest about Holly George-Warren and you wish to learn more about her story, watch this two- part interview on the Rock Book Show You Tube channel.

I learned from watching the interview that Holly George-Warren was the book packager for the centerpiece title Martin Scorsese Presents The Blues: A Musical Journey. This is the third book in my library. I loved that blues project which incorporated the 100 year Salute to the Blues at Radio City Music Hall that was captured on film, Lightning In A Bottle. So once again I am educated by Holly George-Warren through this book. We attended the Salute to the Blues event at Radio City Music Hall in 2003. I also watched the entire PBS series The Blues. There has never been such a comprehensive multimedia focused effort for the blues before or since.

The Experience Music Project (EMP) Pop Conference in 2013 will be a five city live streaming event. The five easy pieces for Pop Conference 2013 will take place in Seattle (Central site), New York (the site of the 2012 Pop Conference that we attended), Los Angeles, New Orleans and Cleveland.  Please refer to the EMP Pop Conference page for more specifics, as the event is just unfolding.

Five different gatherings, in the East, West, South, Midwest, and Pacific Northwest, will take place on the same weekend, with a goal of live streaming the content for those unable to travel and preserving it for posterity. At each location, there will be one panel at a given time, rather than concurrent sessions, to foster regional community.

Local organizers, all veteran conference participants, will steer the program for each Pop Conference city: Oliver Wang of Cal-State Long Beach in Los Angeles (working with the USC Dornsife Center for Feminist Research, directed by Karen Tongson); Tavia Nyong’o of NYU in New York (working with the Clive Davis Institute of Recorded Music); Joel Dinerstein of Tulane in New Orleans (working with the New Orleans Center for the Gulf South); Lauren Onkey of the Rock and Roll Hall of Fame and Museum in Cleveland; and Jasen Emmons of EMP Museum in Seattle.

My aim as an EMP/SFM Member(since 2009) is to increase my Pop Conference involvement in 2013 from the attendee level in 2012. I’m glad the NYU event is open-ended. I have contacted Tavia Nyong’o of NYU to learn more about where I can hopefully take part.

I have a better idea now why Robert Christgau calls the Pop Conference,  “the best thing that’s ever happened to serious consideration of pop music.” I attended the session where he spoke last year (Refer to my blog post about Pop Conference 2012 here)

I look forward to the EMP Pop Conference 2013. I plan to update readers about this event moving forward. When I’m informed you will be informed, so stay tuned 🙂

I an trying to wrap my mind around The Rascals multimedia event, Once Upon A Dream, that Rosemary and I saw last night as we returned to The Capitol Theatre in Portchester, NY. It’s a blog post I want to do justice to so I can’t publish it yet, but trust me I will as soon as I get the proper time to write my thoughts and observations.

In the meantime let me whet your appetite for The Rascals live. There were many highlights last night. The high point for me was seeing Eddie Brigati sing, “How Can I Be Sure”.

Here is a YouTube video of Eddie Brigati at BB King’s Club in NYC. I just love the adoration Kate Taylor shows him as a fan and fellow musician. What’s even cooler is that he invites his wife up and his brother David Brigati to sing background vocals with him. I never realized until I began to research The Rascals how important David Brigati was to The Rascals sessions.

The video gets even better after Eddie sings, “How Can I Be Sure”. Jimmie Vivino who is playing piano asks Gene Cornish to come up and he plays harmonica as they do “Groovin”. What an out a site session!

Steven Van Zandt and his wife Maureen have produced a wonderful, nostalgic musical in Once Upon A Dream. Their love of The Rascals is evident through out the production.

Please enjoy for now Little Steven’s induction of The Rascals into the Rock and Roll Hall of Fame (1997) and their subsequent performance. It will give you a taste of what we lovingly experienced last night 🙂 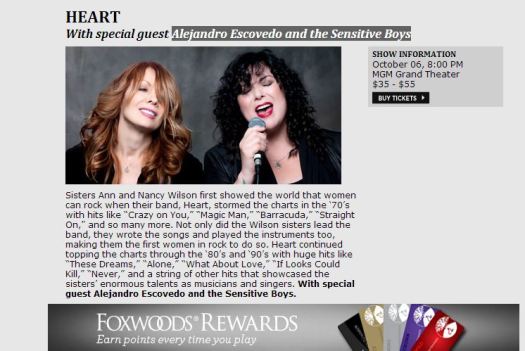 Heart is on a roll. Their recent set of accomplishments is a testimony to the ever enduring work ethic of Ann and Nancy Wilson, their band and management team.

We caught Heart live in concert on Saturday night at Foxwoods. It is the mercurial time for the Wilson sisters.

Heart played a fast paced  and balanced 90 minute set. They are hard rock in glorious splendor. I love how their music beckons.

Ann Wilson’s magnificent voice filled the MGM Grand Theater. Her voice is powerful, I love her delivery. She sounded vibrant and chilled me to the bone several times last night. She touched the music of our heart the most with the song”Alone”.

Nancy Wilson is a talented guitarist and vocalist. She stepped out front, very much in charge, several times during the show. She got crazy on us and that was cool to see. She high kicked and moved with amazing fluidity. She played lots of guitars, I was fascinated by her technique.

The ending song that was the most pleasant surprise was Led Zeppelin’s “Misty Mountain Hop“. Heart knocked that song out of the park. They added a dimension and reverence to this timeless classic that echoes with resonance inside of me.