I’m always in search of albums that reach that calm abyss in the music of our heart. Like the reverberating rings of throwing a stone into a pond echoing across the surface. I have thought about Quicksilver Messenger Service’s lead singer Dino Valenti. He possesses one of the finest vocal timbres in rock from the psychedelic age.

Last year the Tompkins Square label reissued Quicksilver Messenger Service frontman Dino Valente‘s 1968 self titled album. The stoner classic has been pressed to vinyl for the first time, remastered from the original tapes (originally made with Bob Dylan and Leonard Cohen producer Bob Johnston), and has liner notes by American critic Ralph Gleason.

The solo album Dino Valente was the best account of Valenti’s distinctive writing, singing, and guitar playing to be attained in the studio. For the first time this album is commercially available in magnificent MONO. 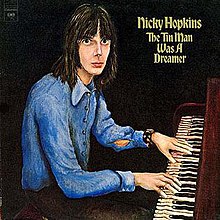 My favorite Quicksilver Messenger Service recording is Just For Love. It’s a trippy, surrealistic series of songs that say flower power, Haight-Ashbury and psychedelia to me.  I am especially fond of the cover art as displayed in this vinyl fold out image.

This song was calling to me tonight. It’s A Beautiful Day and their most recognized song, “White Bird.” It was part of the San Francisco sound but not as recognized as music from Jefferson Airplane, The Grateful Dead, Santana or Quicksilver Messenger Service.