Fans of the legendary Grateful Dead and John Mayer, get ready! These two forces are joining together to perform as Dead & Company for their #AmexUNSTAGED concert on 11/7 at 7:30PM ET. You can watch the livestream and the 24 hour rebroadcast at http://AmexUNSTAGED.com/DeadAndCompany.

This Webcast is going up on the living room wall via HiDef, Optimum, Macbook Pro, and Google Chromecast baby!! Thanks American Express and Dead & Company!

I am pleased to learn that John Mayer, Bob Weir, Mickey Hart and Bill Kreutzmann have formed the next evolution of The Grateful Dead. They will be known as Dead & Company.

They will be joined by Oteil Burbridge on bass and Jeff Chimenti on keyboards. Such an awesome nucleus of talent, I really must say.

I respect how John Mayer carries it forward with the Dead and their music. He is the catalyst for The Dead’s raison d’etre.

I’m deeply excited and energized to be joining some of the Grateful Dead guys in the band Dead & Company. All I’ve really wanted to do in life is play deep, real music – and this is some of the deepest and realest there is. It’s also some of the most satisfying to play as a musician. It’s going to be a challenge and a joy to help make those waves that people can ride wherever they want it to take them. This adventure reminds me a lot of the one I had with the Trio, exactly a decade ago, when I took a break from recording what would be Continuum. Going back to “pure” playing experiences is what keeps the creativity in my own work flowing. I’ve followed the guitar wherever it pointed, and it’s never steered me wrong. I hope you’ll ride along with me, because we’re going to have some fun. Thanks for always letting me go where the spirit takes me…

Bob Weir’s quote about Dead & Company is quite appropriate.

“Those songs weren’t done with us. It was a matter of who wanted to get back out on the road and keep doing it.”

Eric Clapton has often stated that JJ Cale is one of the single most important figures in rock history, a sentiment echoed by many of his fellow musicians. JJ Cale’s influence on Clapton and many of today’s artists cannot be understated. To honor JJ ‘s legacy, a year after his passing, Clapton gathered a group of like-minded friends and musicians for Eric Clapton & Friends – The Breeze (An Appreciation of JJ Cale). With performances by Eric Clapton, Mark Knopfler, John Mayer, Willie Nelson, Tom Petty, Derek Trucks and Don White, the album features 16 beloved JJ Cale songs and is named for the 1972 single “Call Me The Breeze.”

The Breeze, An Appreciation of JJ Cale is currently available for pre-order at Amazon.

You may also pre-order and listen for Free for a limited time to the entire album on iTunes right here!

John Mayer is on the mend and will be announcing this week his Born & Raised Tour 2013 plans. John Mayer, his technical management team are collaborating with Billboard.Biz to hosting a Google+ Hangout with invited fans on Thursday March 21st.

I teach technology priding myself incorporating the latest software engineering advancements when I use the InterWeb. My compliments to the John Mayer team and Billboard for structuring an intelligent qualification survey form for this event. A direct benefit of the invitation to this event with John Mayer and Don Was is that it will sharpen your Google+ Profile for precision and accuracy.

John Mayer is on the comeback trail. He’s endured and overcome painful lessons of late, some of which were self-inflicted, others were due to his health. I’m pleased to report that John Mayer is resuming his live performances with a renewed sense of vigor.

My first sign that John Mayer was back was his appearance segment on the CBS Sunday Morning February 10th broadcast. That insightful segment piqued my interest in what John Mayer is doing next.

I hope I qualify to be invited to the John Mayer Google+ Hangout this could be historic.

If you like knowing what goes into the making of album art and graphics design watch this John Mayer YouTube video about Born and Raised.

I am listening to Buddy Guy‘s biography, “Why I Left Home: My Story”. He talks about his early influences, highlighting 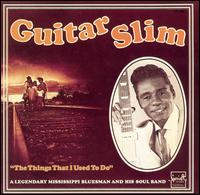 Guitar Slim (Eddie Jones) with deep reverence and respect.  I was fascinated to learn that Buddy Guy loved his recording, “The Things I Used To Do” so much that he played it every day for two years straight. Surprisingly I had never heard this Guitar Slim recording before so I used the Google search engine to get more information about why “The Things I Used To Do” had such a powerful impact on Buddy Guy.

It was one of the biggest hits in the Specialty Record label’s history and stayed on the rhythm and blues charts for 42 weeks.[4] The song held at #1 for six weeks, and was the best-selling R&B record of the year (1953), selling more than a million copies.[2]

I gave “The Things I Used To Do” by Guitar Slim himself a couple of listens. I liked what I heard in this 12 bar blues standard but I wasn’t bowled over by it. Maybe I had the wrong expectations about this song, so I kept listening and interpreting.

I then decided to listen to it through Buddy Guy’s performances and it took a stronger hold with me.

I had no idea so many musicians had recorded a cover version of Guitar Slim’s bestseller. Such artists as Richie Havens, John Mayer, and Stevie Ray Vaughn just to name a few.

I especially liked that Jimmie Vaughn and Gary Clark Jr. joined together to do “The Things That I Used To Do” as a heartfelt tribute for Buddy Guy at The Kennedy Center Honors recently.

I have had the good fortune to see Buddy Guy perform live five times in my life. I have seen him at Toads Place with John Mayer, the Rock and Roll Hall of Fame 25th Anniversary Concert with Jeff Beck(2009),  the 200 Year Salute to the Blues at Radio City Music Hall(2003) and Gathering of the Vibes in Bridgeport (twice).  He is always the consistent showman who possesses this incredible knack of coaxing the blues out of his polka dot guitar.

It has been an exciting and rewarding time for Buddy Guy these past few months. He received the 2012 Kennedy Center Honors on December 2nd, 2012. It was a well deserved recognition for one of our national treasures.

Here is the CBS video segment about the Buddy Guy tribute in its entirety.

At age 76 Buddy Guy shows no signs of slowing down. If anything he has picked up momentum. He is playing his 16 night annual Winter residency at his Buddy Guy Legends Club in Chicago right now.

Last year Buddy Guy released a biography co-authored with David Ritz. David Ritz has written some great music biographies about B.B. King, Ray Charles to name a few. I ordered this item as my new Audible audio book to listen to in the car.

Buddy Guy released last month a live audio CD of a past Winter residency that was recorded at his old Legends Club in January 2010. It also includes as a bonus three studio tracks. I’m listening to this on Spotify 😉

He appeared on the David Letterman Show last night with his band to promote that recording. He performed “Damn Right I Got The Blues“.

Is it just me or is this winter giving you a major case of the blues too? Well Buddy Guy has a solid cure for the winter doldrums. Every January Buddy Guy takes up residence at his club,
Buddy Guy’s Legends in Chicago. Wish I was in Chicago catching his act at his house 😉

Buddy Guy is 74 years young. He’s been making some great music these past few years. Buddy Guy’s legacy has produced a treasure trove of classic blues gems. Three major highlights I enjoy from Buddy’s treasure chest that I play often are A Man and the Blues (1968), Damn Right, I’ve Got the Blues (1991) and Sweet Tea (2001).

He’s been a major influence on Eric Clapton and Jeff Beck and other guitar greats. He’s seminal to blues and rock and roll.

I’ve seen Buddy Guy several times live. He’s always an electrifying showman. The first time I saw Buddy Guy live was at The Salute to The Blues in 2003, where he played a rocking track with Angelique Kidjo and Vernon Reid, “Voodoo Child”. This number was performed at 3 a.m. in the morning, we were exhausted after 8 hours of concert and filming set changes. But this song launched us to our feet.

I next caught Buddy Guy at Toads Place in New Haven, Ct where John Mayer showed up unannounced. That was such a cool evening, standing at the edge of the stage watching them both play the blues with such earnest and mutual respect.

I then saw Buddy Guy just up the road apiece at Gathering of the Vibes in 2007, in Bridgeport, Ct. Here’s a Go Vibes video of Buddy Guy playing “Louisiana Blues.”

The last time  I saw  Buddy Guy live was at Madison Square Garden as Jeff Beck’s guest for the 25th Anniversary Rock and Roll Concert, October 30, 2009. Jeff Beck is so in awe of him.

Here is some video footage of Buddy Guy, Ron Wood and Jonny Lang together in 2010.

Buddy Guy’s latest recording is called Living Proof, a most appropriate title In an earlier post this week about B.B. King I featured the video of the collaboration between Buddy Guy and B.B. King, “Stay Around A Little Longer.” It is one of two guest star tracks on Living Proof. The other guest track features Carlos Santana and Buddy Guy on “Where The Blues Began”. The rest of Living Proof is solid and distinct. 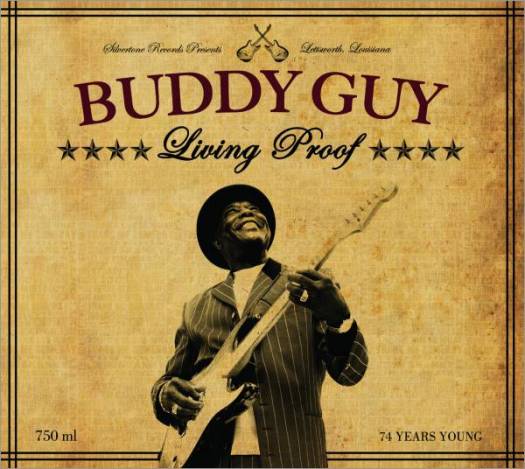