I put my iPad Pro to excellent use today as a digital music magazine. I downloaded two issues Shindig! Magazine (UK) regarding my favorite band, Traffic.

The magazine augments the two-part Traffic article with an exclusive Dave Mason interview as well as a provocative article on the oft-maligned Chris Wood, “Songs From The Wood”.

So if you have looked for a substantive source of knowledge about Traffic this will satisfy that craving.

My personal thanks to British journalist Kris Needs for the comprehensive research he conducted. Well done Sir! Excellent read.

I was recently asked what is my favorite Rolling Stones album and why I feel that way. My answer to that question is the Rolling Stone’s 1968 recording Beggars Banquet. You can smell the street and the factories in their music.

I was raised below the poverty line. I grew up in a city housing project in a rough urban setting. My parents were factory workers. My first job was in a factory. I identified with the life that Mick Jagger and Keith Richards wrote about in the songs on Beggars Banquet. 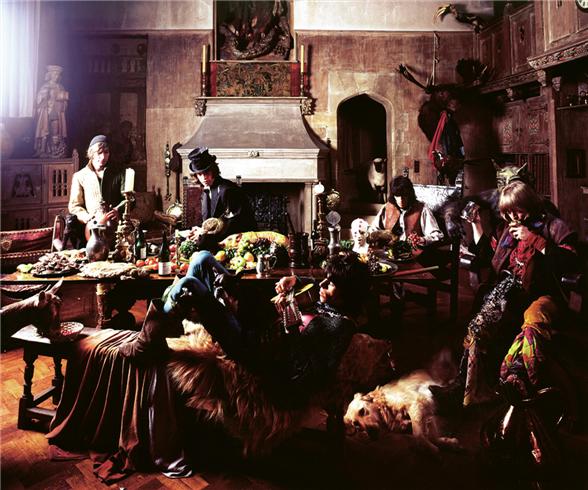 Beggars Banquet was the last studio recording with the original lineup of the Rolling Stones. It makes me sad when I think of the waning days of Brian Jones and what was be falling him. Internal destruction and alienation by your peers is disheartening.

The year 1968 was full of revolution and change. We saw the assassinations of Robert F. Kennedy, Dr. Martin Luther King Jr., the My Lai massacre and the 1968 choice of Richard Nixon for President(shudders). Beggars Banquet reached our shores on December 6, 1968. I purchased it the first day it was available at my local downtown record store.

I was a devoted reader of Rolling Stone Magazine in those days when it was a newspaper periodical. I read it cover to cover. I recall the Rolling Stones Beggars Banquet album review by Jon Landau. It readied me to seek out the album in the stores. I was enraptured when I first played it on my hi-fi set in my bedroom. I played Beggars Banquet to death in 68-69. I brought it to high school and played it in my art class many days while I painted and drew.

What I love best about Beggars Banquet is the raw acoustic blues, Brain Jones slide guitar expertise on “No Expectations”, Mick Jagger’s slurring, sultry vocals and the piano playing by Nicky Hopkins (the 6th Stone). Nicky Hopkins strident piano is the silver thread that sews the tracks together. He accents my favorite individual track on Beggars Banquet, “Stray Cat Blues” with his classic incendiary fire that draws you in until the very last note.

There was a controversy, well when weren’t the bad boys of rock and roll controversial for that matter, with the album cover. The Rolling Stones wanted a cover that depicted lavatory graffiti on the wall and a dirty toilet. London Records refused their request at the time. Sixteen years later  in 1984, the original cover art was released with the initial CD remastering of Beggars Banquet.

Traffic’s second studio album was titled Traffic. It became available from United Artists Records in the United States, October 1968. This was the first Traffic album I purchased. I love this recording on so many levels. This recording really broke Traffic as an international recording sensation.

The synergy of these four musicians generated a memorable and counterbalanced recording. The most well known track was “Feelin’ Alright” which was written and sung by Dave Mason. Dave Mason wrote  50% of the 10 songs on the original album. Winwood/Capaldi wrote the other 50% with some help from Chris Wood on “Who Knows What Tommorrow May Bring”. Dave Mason was with Traffic from May of 1968 until October. It was never quite clear what the real conflict was between Mason and the other band members. As a result Dave Mason never toured with the original Traffic in America.

I first saw Traffic at the Capitol Theatre in Portchester. NY on October 31, 1970, Halloween night. The stage was ringed with lighted Jack O’ Lanterns to celebrate the occasion. I was mesmerized by the Hammond B3 organ playing, crisp vocals and stellar guitar playing of Steve Winwood. When he strapped on his guitar and stepped out to play “Pearly Queen” I was blown away by his dual mastery of two major instruments.

The interplay between Winwood, Jim Capaldi on drums and Chris Wood on flute, saxophone was totally engaging. I had listened to Traffic for two years. I wasn’t ready for their immediacy nor how well their brilliant collaborative style meshed in person. Jim Capaldi was a syncopated but never overwhelming drummer. To get a true sense of how Traffic sounded in November, 1970 listen to the second disk on the Deluxe Edition of John Barleycorn Must Die, recorded at the Fillmore East.

If I had to pinpoint the music genre that best typifies the signature sound of Traffic it would be primarily jazz rock fusion. When I hear the beginning stride piano intro to “Glad/Freedom Rider” or the signatures used on “The Low Spark of High Heeled Boys” an improvisational jazz feel abounds. The secondary characteristic of Traffic’s sound is English folk rock.

The first Traffic recording, was titled Mr. Fantasy distributed on Island Records in the UK. Like most English imports the song tracks varied between the U.S. domestic release and the English album.  Traffic’s USA LP release, titled Heaven Is In Your Mind was on United Artists Records. When Traffic’s record label, Island re-released Mr. Fantasy in 2000 on Audio CD. It was then that the UK and USA releases were synchronized, eliminating the disparity of the tracks, in stereo and mono.

Mono bonus tracks from the US 2000 CD release

Original US album (Heaven Is In Your Mind)

Stereo bonus tracks from the US 2000 CD release

Jimmy Miller produced this album and Eddie Kramer engineered it! How’s that for a dynamic duo for ya 😉

For more insight into what this period in music was like refer to the Rolling Stone Magazine Archives All Access section to read about the early days of Traffic with articles by Al Kooper, Jann Wenner and David Dalton (Cover Story).

This morning I received an interesting e-mail from Genesis Publications. They are a limited edition, specialty music book publisher from England that “produce lushly designed rock photo books.” – N.Y. Times

I received advance notification of a book title of keen interest to my music collection.  Mr. Fantasy, The Lyrics of Jim Capaldi. I greatly admire and respect, Jim Capaldi the backbone of Traffic.

There was a time in my life (1968-1971) where the only two bands that mattered were Jethro Tull and Traffic. I was a fervent fan of these two English music groups. I went to their live concerts at the Fillmore East and the Capitol Theatre in Portchester, N.Y.

I even bought an exact replica of the stars shirt that Steve Winwood is wearing on stage in this photograph. It caught him by surprise that I was wearing that same shirt in the audience (7th row center) on the evening that this set list was based upon. Notice that Scott Muni introduces Traffic that night 😉 (A correction to the dates of these recorded June shows, they were June 26 & June 27 ,1971, I know I have the ticket stubs to prove it!)

Traffic was a special group with a magical mix of musicians. I learned about Traffic by listening to the radio show, Things From England that Scott Muni hosted on WNEW-FM102.7 on Friday afternoons. WNEW-FM, a Metromedia affiliate out of New York City had a major influence on my musical tastes. WNEW-FM’s progressive rock format created an intellectual music platform that we devoutly followed all hours of the day and night.

My favorite Traffic album is Traffic (1968).