I’ve read from various sources about a powerful music documentary, Janis: Little Girl Blue by Amy J. Berg. It has revelations about the personal life of Janis Joplin I have always wanted to know.

Thanks to an understanding between the Janis Joplin estate and Amy J. Berg’s documentary company we will learn more about Janis from her private letters to her family. Cat Power is the voice of Janis Joplin and the narrator of those intimate letters.

The film will be screening at the IFC Center in the Village in New York City through December 3rd, 2015.

My Father tried to teach me how to be a stamp collector. I lacked the patience to work with stamps, first day issues etc. However if I was collecting today I’d be all over the music stamps.

“Janis Joplin (1943-1970) was a groundbreaking singer whose powerful, bluesy voice propelled her to the pinnacle of rock stardom. An icon of the 1960s, she was known for her uninhibited and soulful performances. Joplin is now recognized as one of the greatest rock singers of all time, as well as a pioneer who paved the way for other women in rock music.”

R. Crumb‘s influence on my art and blues music tastes started in 1968 with Cheap Thrills the second album from Big Brother and the Holding Company.

Crumb had originally intended his art for the LP back cover, with a portrait of Janis Joplin to grace the front. But Joplin who was an avid fan of underground comics, especially the work of Crumb, so loved the Cheap Thrills illustration that she demanded Columbia Records place it on the front cover. It is number nine on Rolling Stone’s list of one hundred greatest album covers.

I value R. Crumb’s insightful articulation of the blues.  He has created various collectibles which uniquely educate and tell us about the blues. One such collectible is the Heroes of the Blues Trading Cards.

The trading cards complement the book, R. Crumb Draws The Blues, in which his homage to the life of Delta bluesmen Charley Patton, is beautifully rendered. Almost of comparable quality is the story of jazzman Jelly Roll Morton‘s struggle with a career-damaging voodoo curse. Crumb’s fondness for pre-war (WWII) country and blues records predominates this title.

If this type of content peaks your interest in R. Crumb as an album art graphics designer, may I also suggest, R. Crumb: The Complete Record Cover Collection. For music/album cover fans (like myself) this is one of Robert Crumb’s finest books.

I also discovered that R. Crumb is very good friends with Eden & John’s East River String Band. He has illustrated three of their covers and plays mandolin on their latest album, Be Kind to A Man When He’s Down.

ALL ARTWORK IS COPYRIGHT ROBERT CRUMB UNLESS OTHERWISE NOTED 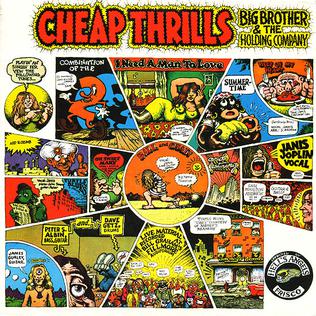 Yesterday would have been Janis Joplin‘s 69th birthday. Legacy Recordings took that opportunity to announce they will be repackaging a newly curated definitive two-disc edition of Joplin’s final studio album The Pearl Sessions. It contains newly discovered studio outtakes, live performances and other sonic rarities. It is due to be available on April 17, 2012.

The Pearl Sessions brings together, for the first time in one package, the original mono versions of the album’s 45s alongside the original LP tracks as well as the revelatory newly discovered alternate versions, outtakes and vocal takes of Pearl‘s classic tracks.

The Pearl Sessions includes newly discovered recordings of Janis in the studio, joking with producer Paul A. Rothchild and her Full Tilt Boogie bandmates as they work through what would become an essential part of Janis Joplin’s core catalog. Paul A. Rothchild is best known as the producer of the first five albums by The Doors. He also produced LPs and singles for John Sebastian, Joni Mitchell, Neil Young, Tom Paxton, Tom Rush, The Paul Butterfield Blues Band, The Lovin’ Spoonful,Tim Buckley, Love, and Rhinoceros.

Columbia/Legacy Recordings recently announced the release of Live at the Carousel Ballroom 1968, a previously unavailable live concert recording of Big Brother and the Holding Company featuring Janis Joplin, recorded June 23, 1968 by legendary sound man Owsley Stanley, a/k/a “Bear,” who supervised the mastering of this release before his fatal car accident on March 12, 2011, in his adopted homeland of Australia. Dedicated to Bear, the album will be released on March 13, 2012, marking the one-year anniversary of his passing.

Michael Ochs is an American photographic archivist best known for his extensive collection of pictures related to rock music dating back to the 1950s and 1960s. The Los Angeles Times calls Ochs “America’s preeminent rock ‘n’ roll photo archivist”[2] and described his archive as “the dominant force in the rock image marketplace”;[3] The New York Times called it “the premier source of musician photography in the world”.[1]

Book: Rock Archives: A Photographic Journey Through the First Two Decades of Rock and Roll