I have seen several notable acts at Staples High School such as The Youngbloods, J Geils Band, Tom Hardin, Delaney and Bonnie and Friends, Taj Mahal (with the Howard Johnson Tuba Orchestra), The Mahavishnu Orchestra , and Peter Frampton.

There was the venerable Players Tavern an intimate club setting where I saw Muddy Waters, Peter Tosh, Toots and the Maytals, Pat Metheny, Richie Havens, and Melanie.

I like the idea of gastronomic delights intermixed with great blues/rock music. Feed the stomach and nurture the soul.

According to Rolling Stone Magazine, John Geils, founder of the J. Geils Band, has filed a lawsuit against the other members of the group over use of the name in an upcoming tour that doesn’t feature the guitarist, Reuters reports. Geils names band members Richard Salwitz, Danny Klein, Peter Wolf and Seth Justman in the lawsuit filed in Boston Superior Court, claiming they “planned and conspired” to exclude Geils from a tour and are unlawfully using the group’s trademarked name. On their 2012 tour, guitarists Duke Levine and Kevin Barry replaced Geils and the new drummer was Tom Arey.

I find it interesting it takes two guitarists to make up the role of J. Geils. I guess you have to talk to the hand to learn more about why the members of the J. Geils Band don’t get along with J. Geils himself.

I’ll be eager to read the reviews of the J. Geils Band concerts coming up if they aren’t court injunctioned…..

My favorite J. Geils story took place in the late 70s. I was the manager of the books and record department at Caldor in Stamford, Ct. One morning this man in a black hat, raincoat and glasses approaches me. He takes a folded piece of paper out of his pocket and says to me. “Do you have “Blow Your  Face Out Baby?” He was oblivious what he was looking for and who the artist was. I knew straight away it was J. Geils Band live, but I had to do everything in my power not to laugh at this conservative business person buying a jamming blues rock record for his son as a gift. I had the recording in stock and I sold it to him. He was pleased. That was just one of those record buying days that stays with you years later. 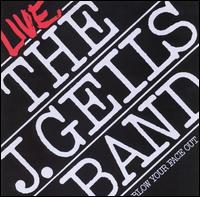 I was thinking of singer, bluesman, radio disk-jockey Peter Wolf today. I strolled over to his Facebook Page and learned it is his birthday, Cool. Wishing Peter Wolf a Whammer Jammer of a birthday today!

Here’s Peter Wolf and the J. Geils Band at Fenway Park in Boston from 2010.

Blow Your Face Out

This year marks the 40th anniversary of the closing of The Fillmore East on June 28, 1971. No rock hall echoes stronger in the music of our heart than Bill Graham’s legendary venue in the East Village section of NYC.

The concert that closed The Fillmore East is equally, if not more historic.  The Allman Brothers Band headlined that night, with J Geils Band as the middle act and Albert King as the opening act. Guest stars who joined The Allman Brothers Band and the other scheduled acts on stage that night included Mountain, Country Joe McDonald, Edgar Winter’s White Trash with Rick Derringer and The Beach Boys. I listened to the entire concert which was broadcast live over WNEW-FM 102.7.  The concert went from 8 p.m. on June 27th until 6 a.m. in the morning of June 28th.

There were 40 albums recorded live at The Fillmore East from 1968 through 1971. Considering there were 111 main concerts during that time frame (more if you count both early and late show events) 40 concerts was close to 1/3 of all shows that were performed there. You can see the complete list of live Fillmore East albums, sorted A-Z by recording title on this Wikipedia page, http://en.wikipedia.org/wiki/Category:Live_at_the_Fillmore_East_albums

Many people associate The Allman Brothers Band At Fillmore East as “the” recording that captured the music live of the last night. Truth of the matter is that only when the deluxe edition of  this dual CD was released did we get to hear two tracks from June 28th, “One Way Out” and “Midnight Rider”. According to Peter Wolf, lead singer of the J Geils Band who performed that night, “the Allman Brothers started at around four in the morning. At dawn, they were still playing “Crossroads,” or something like that.” (Graham and Greenfield, 2004).

There are several definitive sources of information available about The Fillmore East. I refer you to my reference section at the end of this blog post.

As we get closer to celebrating the real 40th anniversary of the closing of The Fillmore East I will update this blog post with any potential celebrations and events. Trust me  I plan to take part as fully as I can in those events.

An immensely satisfying book about the Fillmore East authored by Amalie R. Rothschild who worked for the  Joshua Light Show and was the official photographer for The Fillmore East. Her camera captured many intimate moments as they occurred during those exciting three years. Live at the Fillmore East,  A Photographic Memoir, http://www.amazon.com/Live-Fillmore-East-Photographic-Memoir/dp/1560252790

Bill Graham and The Fillmore East are synonymous. This is a well written autobiography and collaboration.