Dogfish Head Craft Brewery is a Sponsor this year. This cool image, made by concert poster artist Marq Spusta, will be available as a free poster at select record stores on Record Store Day and at a few beverage stores hip enough to stock Dogfish Head as well. I don’t get HBO on my Optimum Cablevision system. I was thankful that Rolling Stone Magazine posted information that the full HBO Nirvana Rock and Roll Hall of Fame 2014 induction ceremony was available on YouTube.

“It is the highest calling for an artist, as well as the greatest possible privilege, to capture a moment, to find the zeitgeist, to expose our struggles, our aspirations, our desires, to embrace and define their time,” he says. “That is my definition of an artist. Nirvana captured lightning in a bottle. – Micheal Stipe, R.E.M. Induction Speech”

I have read a great deal about last night’s Rock and Roll Hall of Fame 2014 Induction. Thanks to the eye of the camera lens which captured two wonderful “emotional” moments that took place for Nirvana. How could the music of our heart not be consoled and glad for all.

“I’m probably going to cry. I’m already crying because he’d be so proud. He’d say he wasn’t, but he would be. I just miss him so much. He was such an angel,” said Kurt Cobain’s mother, Wendy O’Connor, after Nirvana was inducted. Cobain was 27 when he died.

Many Nirvana fans were probably holding their breath last night when Courtney Love walked up to the podium. She’s done little to mask her feelings about Dave Grohl over the years and one never know what she’ll say in front of an open microphone. But Courtney seemed overwhelmed by the moment — particularly after watching Kurt Cobain’s mother cry — and she completely abandoned a long speech she prepared and used the time to pay tribute to her Nirvana “family,” speaking for no more than a minute. When she got to “Mr. Grohl,” she teared up, walked over and gave him an enormous bear hug. It was one of the emotional high points of an extremely emotional night, and a very classy move for Courtney. ​

Little did everyone realize that when Dave Grohl announced at the Global Citizen Festival in Central Park NYC on September 30, 2012 that he was taking a hiatus from the Foo Fighters the significance of that pivot point in his music career.

Before playing ‘Learn To Fly’, the group’s fourth song of the night, Grohl said: “Without making a big deal out of it, we
don’t have any shows after this. This is it, man. Honestly I don’t know when we’re gonna do it again…and this is the perfect place to do it.”

Dave Grohl has been incredibly busy since that event. He played drums at the Kennedy Center Honors for Led Zeppelin on December 3rd. He appeared with Sir Paul McCartney and members of Nirvana at 12-12-12 and then on the Christmas SNL show.

Dave has produced a labor of love movie about Sound City Studios in Los Angeles, California, Sound City. This studio has been the birthplace of many of the greatest recordings in rock and roll history. The studio has since closed but we get to visit it once again through the miracle of  the camera lens.

I really feel like SOUND CITY is my life’s most important work. I hope you do too. – Dave Grohl

There is a companion motion picture soundtrack, Real to Reel with many new tracks recorded through the 1970’s Neve Sound Board Dave Grohl purchased from Sound City Studios.

The making of this film and the soundtrack initiates the nucleus of an innovative sound direction for Grohl and friends.

Dave Grohl will debut a new supergroup, named Sound City Players, at this year’s Sundance Film Festival, where the Sound City movie will début reports Rolling Stone. The track listing above gives a good sign as to who that new supergroup may feature 😉

2013 promises to be an extremely busy and productive year for Dave Grohl. He will deliver the keynote speech at this year’s South By Southwest festival in Austin, Texas on March 14. He will also be drumming on the forthcoming Queens Of The Stone Age album.

We attended a concert by The Zombies last night at the Mohegan Sun Wolf Den. Our seats were right down front in the “high roller” section 😉  Rod Argent played keyboards directly above us. Colin Blunstone sang to our immediate right. 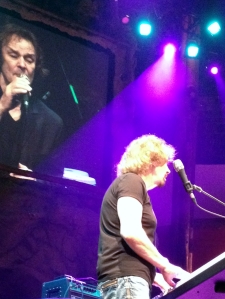 Rod Argent and Colin Blunstone spoke about their five decades history which features noteworthy and measurable accomplishments. The Zombies gave us a very balanced set of that music legacy. They did their 60’s hits, then delved deeper into Odessey and Oracle performing five tracks of this masterpiece recording. “Care of Cell 44”, “A Rose for Emily”, “I want Her, She Wants Me”, and the last song was the timeless universal hit,  “Time of the Season“. It was a very fun sing along at  The Wolf Den 🙂 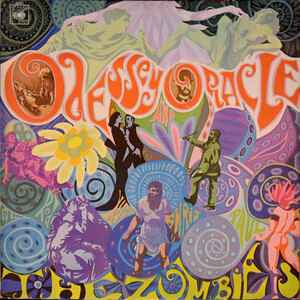 Rod Argent spoke as one of the proud parents of Odessey and Oracle how the rich production has influenced generations of musicians. He was quite fond of Dave Grohl’s quote in NME.

“I would have loved to have been in the studio when The Zombies recorded [their 1968 masterpiece] Odessey and Oracle,” Dave Grohl told New Musical Express in 2011, when asked which classic album he would most liked to have put his stamp on. “It’s such a simple record, and such an amazing album, but the sounds are really primal and raw because of the technical limitations of the time. So yeah, probably that.”

They highlighted four songs from their latest studio recording,  Breathe Out, Breathe In, the title track, “Any Other Way”, “A Moment In Time”, and “I Do Believe”. I must admit the album has sturdy legs and grew on me last night.

They also featured the Argent song, “Hold Your Head Up” which was done in rousing fashion. I loved the fact that you had two members of Argent there, Rod Argent of course who truly shines on keyboard and special effects on this rock classic. We also had Jim Rodford the original bassist for Argent. Jim has also played with The Kinks and The Animals II. Hilton Valentine formed The Animals II. He now lives in Wallingford, Ct. and was in the audience directly behind us. He smiled approvingly through much of the show. I actually saw Hilton Valentine play with The Yarbirds a few years back at The Oakdale in Wallingford. 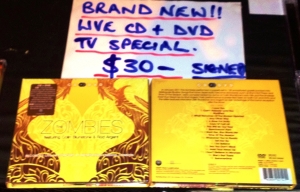 I bought a signed copy of The Zombies, Recorded Live In Concert At Metropolis Studios London.

Dave Grohl, Foo Fighters states: “If it weren’t for The Beatles, I would not be a musician. It’s as simple as that. From a very young age I became fascinated with their songs, and over the years have drowned myself in the depth of their catalogue. Their groove and their swagger. Their grace and their beauty. Their dark and their light. The Beatles seemed to be capable of anything. They knew no boundaries, and in that freedom they seemed to define what we now know today as ‘Rock and Roll.’

Easter 2011 has come and gone. My Lenten promise was not to buy any new music recordings. If you know me at all, I trust you’ll agree that was not an easy 40 day sacrifice for me.  I buy 70+ recordings a year between CD, vinyl and digital download 😉  I was only able to honor Record Store Day 2011 in principle, not practice.  This was the biggest Record Store Day yet! My next step is to give each of these a listen on Microsoft Zune. The beauty of a Microsoft Zune subscription is that I can listen to any recording available on Zune. Each month I get to download 10 tracks free. So it’s time to start listening and making a selection 😉 Teeing up Paul Simon first…