I reflect on what Glenn Cornick and the early Jethro Tull band means to me. The beautiful aspect of musicians we admire is that we can continue to stay connected with them through their recorded music.

From Glenn Cornick’s Bio on the Official Jethro Tull Website:

“This Was”, “Stand Up” and “Benefit” were to feature the personable and idiosyncratic style of Glenn Cornick during the next three years in which he played his important role in the early years of Tull.

Ever the party animal, Glenn grew apart from the other band members during 1970. This was a reflection, not of Glenn’s social waywardness, but of the reclusive and insular nature of the other guys’ rather private and atypical lifestyles.

I am listening to Jethro Tull’s This Was recollecting fond memories of watching Glenn Cornick play bass live with Jethro Tull in 1969 at The Fillmore East on the Stand Up tour. I saw him once more at The Capitol Theatre in Portchester, NY April, 1970 on the Benefit tour.

Glenn Cornick was a very animated bass player. He had long black hair that he attempted to keep in control with a head band. But when he played bass he would dance wildly as his hair flopped all around his face. Loved that image of him and that’s how I want to remember Glenn Cornick best. Happily immersed in his pursuit of bass notes driving Tull along.

Peace be with you Glenn Cornick the music of our heart goes out to your family and loved ones in this time of sorrow.

My favorite Jethro Tull recording which never gets old for me is their third album, Benefit. I consider this collection of songs their greatest studio recording. My rationale is based upon the diversity of the mix of music, the recording techniques chosen at the time (speeding up the tape on “Play In Time” for example) and the addition of John Evan on keyboards.

I saw the Benefit tour in 1970 at the Capitol Theater in Portchester, NY. I liked the nucleus of musicians and how at ease they all seemed that evening. Little did I realize that the bass player Glenn Cornick was growing disenchanted with the group and would leave by years end to form his own band, Wild Turkey.

Musicians on Benefit were:

This is a classic song for an Indian Summer Sunday afternoon.  “My Sunday Feeling” is taken from the debut Jethro Tull album, This Was (1968)  featuring Ian Anderson on vocals and flute, Mick Abrahams on guitar, Glenn Cornick on bass and Clive Bunker on drums 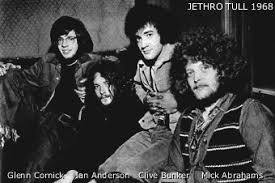