Progressive rock has been decimated  by the deaths of Keith Emerson, Greg Lake, and John Wetton within the last year. Prog Rock Magazine will be featuring a cover story about John Wetton’s music and life in their next issue.

Asia has released a three-disc live set, Symfonia: Live in Bulgaria 2013 which serves as their memorial to late singer John Wetton.

It was recorded in the Plovdiv Roman Theatre at the Sounds of the Ages festival four years ago and marks one of guitarist Sam Coulson’s first appearances with Asia after he replaced founding member Steve Howe. “The band never sounded better,” Wetton later said of the performance.

Asia, ‘Symfonia: Live in Bulgaria 2013′ Track Listing
“Sole Survivor”
“Time Again”
“Face On The Bridge”
“My Own Time”
“Holy War”
“An Extraordinary Life”
“Days Like These”
“Open Your Eyes”
“Only Time will Tell”
“Don’t Cry”
“Heroine”
“The Smile Has Left Your Eyes”
“Wildest Dreams”
“Heat of the Moment” 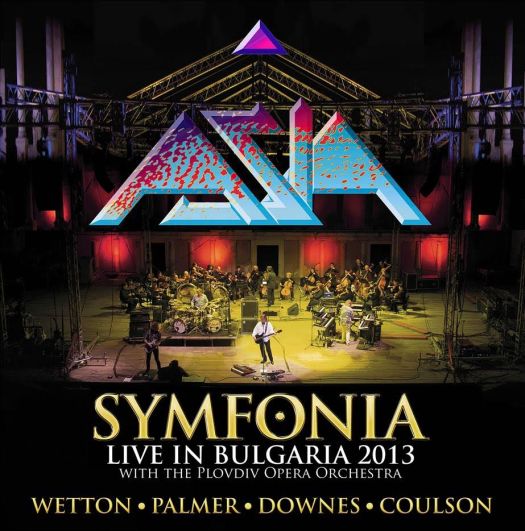 Roger Dean has been art designer for the progressive rock bands, Yes and Asia for decades.  He designs worlds that immerse us in compelling art illustrations.

The last time I saw Yes in concert was 2004 at Mohegan Sun Casino Arena in Uncasville, Connecticut. It was their 35 anniversary Songs From Tsongas Tour. Roger Dean designed a full stage experience that engulfed members of Yes. The event has been preserved on DVD. Here is song from that historic tour, “Going For The One”,

Roger Dean has two unique world events coming up, the first one will take place in England next month in November. The Roger Dean Art Exhibition will include Roger Dean and Rick Wakeman in person together. They will appear on November 3rd, 2012 at Trading Boundaries, Sheffield Green, Sussex, England.

The other event is the science fiction convention called Arisia which takes place in Boston, Massachusetts  January 18-23, 2013. Roger Dean will be on several panels during the convention, and will also be giving a talk about his own work. The image posted below is his T shirt design for this event.

I admire the tenacity of the band Asia. They are very committed to the longevity of their music and global audience.

Their Connecticut dates later in the year include The Ridgefield Playhouse on October 23rd and Mohegan Sun on October 25th.

The new album, produced by Mike Paxman, has been hailed as Asia’s best album since its classic early 80s releases. The album will be released on CD, collector’s edition CD/DVD (featuring new music videos and behind the scenes footage), and on a limited edition vinyl.

The album’s first single, “Face on the Bridge,” will be available for download on May 14 and is already streaming online.

The Roger Dean, Year of the Water Dragon artwork for the new album and tour is stunning.

Steve Howe, venerable progressive rock guitarist of Yes and Asia fame will release his 22nd solo album since 1975 on November 21, 2011.

It is entitled Time. It is a combination of folk and classical works.  Five years in the making it is a collaboration between Steve and film and television composer, Paul K. Joyce.

This will be Steve’s first album without drums.