Rosemary and I spent a memorable evening in Middletown, Connecticut last night enjoying ourselves as patrons of the arts. First we savored a superb dinner at Tuscany Grill on College Street. The pan seared scallops over angel hair pasta served in a spicy but oh so tasty sauce was exquisite. We highly recommend this two-floor Italian restaurant. The service was impeccable. We sat upstairs in the restaurant, overlooking the bar, directly across from the high-definition TV screens mounted on the opposite side wall. CNN was broadcasting special coverage of the breaking developments in Egypt which continued to be unsettling. Change is going to come, but what will it mean for the rest of our planet in terms of next-level co-existence?

We finished our meal quickly to get to the Wesleyan University Crowell Concert Hall to hear a pre-concert talk by Sarah Politz. We got a little lost trying to find the building so we missed Sarah’s presentation. 😦 I wonder if Sarah has slides available and how I might contact her about that information? (I’m open to suggestions…)

The Wesleyan University Center for the Arts eleven-building complex houses classroom and studio facilities in support of arts programs at the university. The CFA Spring 2011 calendar offers a comprehensive choice of  leading, innovative world music performers. Anthony Braxton, noted American composer and jazz musician is a Professor of Music in the Wesleyan Music Department.

The Crowell Concert Hall is an architectural wonder with a breathtaking interior design. The stage is all housed in wood with creative textures of multi-tiered roofs that jut out at different angles. The acoustics of this 400+ seat venue are aesthetically pleasing. This was the perfect venue for the Charles Lloyd New Quartet. I felt like we had lifted and placed into the music setting that served as the backdrop for the ECM live Charles Lloyd Quartet recording Rabo de Nube.

I was finally getting to witness Charles Lloyd after many decades of  silently desiring to see him perform live. Charles Lloyd has a spirituality and presence that is very commanding yet humble. He plays the sweetest saxophone I have ever heard. His sax was constructed of soft white gold. His energy was amazing as he drew us in from the first breath.

Charles Lloyd is magical to watch. His phrasing on the sax captures your senses. He accents his saxophone playing with sweet melodic verse contrasted by spiritual meditation of the highest order. I would have to say he creates a church that effectively communicates each person’s sense of self-worship and faith. I truly loved watching him perform as he lifted his leg and knee to further accent the notes. He is a band leader who delegates telepathically and the quartet responds with instinctual punctuality.

Charles Lloyd is complemented by three super talented jazz musicians. Jason Moran on piano has the touch of the keys on the Steinway that mesmerize your senses. My wife and I have seen Jason play before with his bandwagon at Long Wharf  Theater in New Haven, where he did a recreation of Thelonious Monk‘s famous 1959 Town Hall Concert complete with black and white vintage 35mm footage. He made Charles Lloyd smile several times when he improvised or stretched out on his piano solos.

Charles Lloyd offered a varied music program.  His execution of “tenderness sutras” wove rich tapestries of the heart within us. He invited Jason Moran’s wife, Alicia Hall Moran, who is an extraordinary mezzo-soprano vocalist to accompany their version of “Go Down Moses”. Alicia’s operatic voice added a beautiful, haunting accent to the American Negro spiritual. What really struck me was the irony of hearing this song’s lyrics in light of the revolution of change happening in Egypt at the same moment in time as they played. History repeating history…

When Israel was in Egypt’s land: Let my people go,
Oppress’d so hard they could not stand, Let my People go.

The New Charles Lloyd Quartet also features Reuben Rogers on stand up double bass. He was very relaxed in his role yet his ability to slap the notes or strum the strings earned your immediate respect.  I especially loved how into his distance he would go. taking us on that journey with him. His double bass I think was made of deep cherry red wood and it produced an eloquent resonance.

Eric Harland blew me away with his inventive drumming style. His technique and sensibilities captivated my attention as soon as he started at his drum kit. He would rest a folded over tambourine on the high hat or use the sets of bells he had on draped on either side of his drums. He had a really cool way of using his drum sticks to accent the music. He would drag the tip of the drum stick across the cymbal top at just the right point in the selection. He was never overpowering when he drummed but you paid strict attention to his drum shots and rolls as they were all very unique

Charles Lloyd made time after the concert to meet with fans and sign autographs. I was thrilled to meet him. He signed my concert program and the CD cover of his latest CD, which we heard a few songs from that night, The Mirror . I thanked him for his healing music. He folded his hands in prayer and bowed ever so slightly. I left his company elated and reassured being in his spiritual presence. 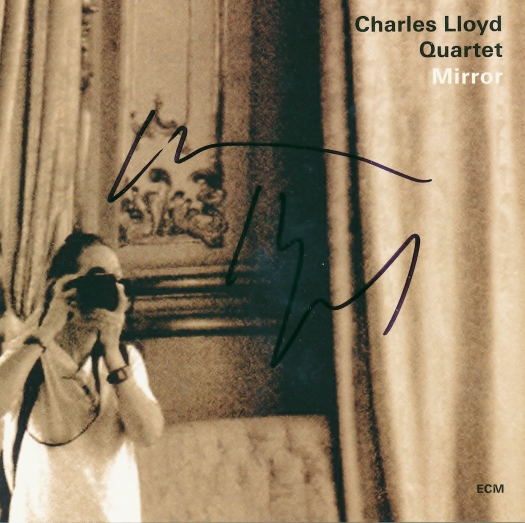