This video is a collaboration between Graham Nash and celebrated filmmaker and animator Jeff Scher. The imagery frames the youth-led liberal activism of 2018 against the backdrop of the Civil Rights Movement and Peace demonstrations of the 1960’s, providing a powerful visual aid to Graham Nash’s relevant-as-ever appeal to teach not only our children but also our parents well.

“I wrote Teach Your Children because we have much to teach them. Conversely, I believe we as parents have much to learn from them as well. I think that Jeff Scher did a wonderful job of animating my lyrics and positioning the song in a contemporary setting.” – Graham Nash (2018)

Sunday is a day of worship and reflection. I ready for mass, gathering my prayers for family, friends and the planet.

My heart was moved to tears when I saw the miracle of the bison joining the protection at Standing Rock. Mother Nature has shown us her guidance through the animal kingdom. It is truly a sign from God.

The Whole World Is Watching 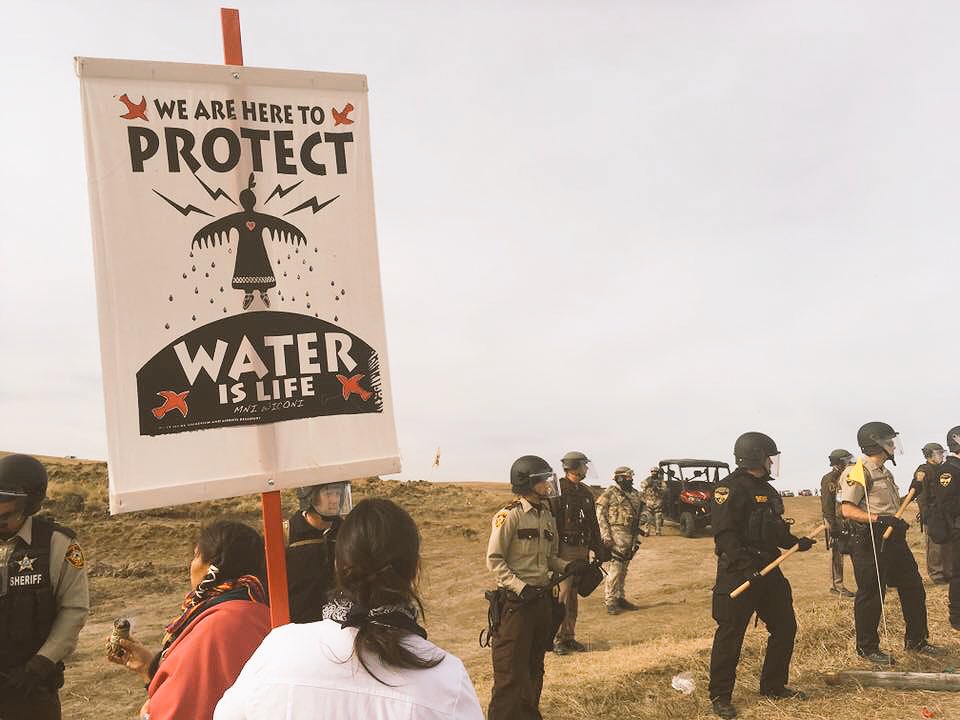 Here we are at the halfway point of 2014. NPR Music  has published their list, “NPR Music’s 25 Favorite Albums Of 2014 (So Far)“. I like to see if I have covered or heard any of the 25 recordings listed. The only artist I have listened to and written about is St. Vincent. I’m rubbing my hands with glee as there are 24 albums to acquaint myself with next.

I uncovered a gem in the list with a Los Lobos album I was not familiar with at all. Si Se Puede!: Los Lobos And Friends was originally released in 1976. 38 years later, long after it had gone out print, the music was finally digitally re-released this spring to coincide with the release of a biopic about César Chávez. Herb Albert donated his A&M Records studios to a group of young Chicano musicians who called themselves Los Lobos del Este de los Angeles and who gathered some of their friends to record some of the music that had become part of the farm worker movement.

Los Lobos is celebrating their 40th anniversary as a band this year. Congratulations gentlemen. Peace, Ese!

“Our greatest enemy is our own political ignorance” – M1

Gil Scott-Heron was an effective communicator who spoke to the restless soul in the music of our hearts. I love that visionary producer Kentyah Fraser has collaborated with original Midnight Band keyboardist, composer Brian Jackson (plus others) to build on that foundation and further the legacy of Gil Scott-Heron, forefather of socially-conscious rap.

The more I listen to the tracks on this recording, the better reacquainted I become with the cause of objection and protest. My favorite track thus far is “Occupy Planet Earth” which features that raw, commanding energy of Chuck D with M1.

This video explains the structure, method and purpose of why Evolutionary Minded (Furthering the Legacy of Gil Scott-Heron)  was released. It commands my total respect as a person of conscience as it should yours and those you love.

The élite GOP party that has shut down our government should heed this message well. For we are no longer complacent about such hostage taking measures. Fight back we will and must.

Bruce Springsteen has played a strategic role in the re-election of President Obama. The song, “We Take Care of Our Own” has become the rallying cry for the next four years.

Last night when President Obama gave his victory speech the song at the end of the event as confetti flew through the air was “We Take Care of Our Own”. I was so proud of President Obama, his family, his campaign team and of the merits of Bruce Springsteen’s song. How fitting and right was the message the song communicated.

Wherever this flag’s flown
We take care of our own

In the spirit of  solidarity I proudly share that music artists unite for a major common cause once more. This time it is for the worthy cause of Occupy and Occupy Wall Street. Some legendary names in music and art are voicing their support for the Occupy movement, with a music compilation record called Occupy This Album.

The album was inspired by the Occupy Wall Street movement and will “provide an anthem and rallying cry for the protesters involved in the uprising,” producers say.

Producers of the album say all the proceeds will benefit the Occupy movement. 50% of the proceeds will be donated to the Occupy Wall Street General Fund. The other half of money generated will be distributed evenly among the major occupations across the country, according to Jason Samel of Music for Occupy, who is producing the album.  They hope to raise anywhere from $1-3 million dollars with this recording.

I plan to buy a copy and I hope you will too!!!

“The Occupation movement is really the voice of the people, it’s an idea that’s been a long time coming. I fully support their non-violent protests against a system that is carefully crafted in favor of the rich one percent,” Nash is quoted as saying.

On Monday November 21, 2011 an important voice, music has been added to the Occupy Wall Street and global Occupy movements.

Their public statement of support.

We, the undersigned musicians and all who will join us, support Occupy Wall Street and the Occupy Movement around the world.

The press release can be found here:

The Web site is designed as a petition and has been signed by many musicians. I expect the list to grow extensively and for music to be actively contributed to the Occupy campaigns.

The Occupy Musicians project is a mirror of the very successful work going on at Occupy Writers (http://occupywriters.com/) and Occupy Film Makers (http://www.occupyfilmmakers.com/), with a similar statement. Inspired by, and with help from Ginny Suss and Vanessa Wruble at the website Okay Player, they have launched the website Occupymusicians.com as a public statement of support for the Occupy Wall Street movement, and all Occupy movements.
In addition to the public statement of support, OccupyMusicians will serve as a resource:
• to facilitate performances at Occupy spaces and events
• provide links to media wishing to interview Occupy-supporting musicians
• host testimony and other writings of musicians for why they both are and support the 99 percent
• host embedded media to Occupy-related songs and music videos
• network musicians to Occupy locations and Occupy fund raisers
Twitter at @weoccupymusic