I love the time I get to spend between Christmas and New Year reflecting upon and renewing commitments to an ongoing pursuit of the arts. Its treasured down time from a perpetual teaching schedule that runs day and night, all year round.  I try to spend the time productively, teaching myself new software, preparing for certification exams, etc. I also spend time listening to music that escaped my grasp during the year, reading through my significant music magazine and book pile, visiting Barnes & Noble to stay vibrant and aware.

As a result I have accumulated some meaty writing topics for the coming year. They represent more substantive research into genres/artists I want to explore more in-depth, hopefully across multiple blog posts. This is my revised approach to professional blogging in 2013, which I hope my readers will like and seek to learn along with me (or teach me something new they know in these areas).

The five 2013 art blogging projects are:

I reflect on Patti Smith’s Camera Solo Exhibit that we saw last year at the Wadsworth Atheneum in Hartford. The exhibit was filled with Patti’s Polaroid Land Camera photographs of famous grave sites and residences of literary greats like Virginia Woolf’s bed or Walt Whitman’s tomb. 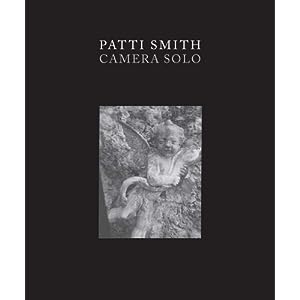 My wife and I have seen Patti Smith perform several times live at the Metropolitan Museum of Art. This will be the first time we will see her with The Patti Smith Group. Smiling at the pictures taken from the tour so far, I thought this was a great shot of Patti and her band with the Neil Young & Crazy Horse set backdrop.

Alchemy is an influential philosophical tradition whose early practitioners’ claims to profound powers were known from antiquity.

The third episode of A Rust Trilogy, which began with Rust Never Sleeps in 1978, and continued with Weld in 1990, now concludes with Alchemy in 2012. Things have changed, yet they stay the same. Alchemy, like Rust and Weld, finds the boys at another stage of life’s journey. Time has taken its toll, yet the spirit seems unstoppable.

God willing we will see the Alchemy Tour in less than two months on December 4, 2012, Webster Bank Arena, Bridgeport, Ct. The Patti Smith Group is the opening act, Horses, Horses….

Three young women are being detained by Russian authorities for allegedly performing a protest song in a cathedral as part of a feminist punk group “Pussy Riot”.

Nadezhda Tolokonnikova, Maria Alekhina and Ekaterina Samutsevich were arrested in March 2012 and charged with “hooliganism”. If found guilty, they could be jailed for up to 7 years.

The three women deny any involvement in the protest although even if they took part, the severity of the response of the Russian authorities would not be a justifiable response to the peaceful – if, to many, offensive – expression of their political beliefs.

Tell the Russian authorities to drop all charges and release them!

Add your voice in protest along with Patti Smith, Madonna, Sting and Anthony Kiedis of the Red Hot Chilli Peppers to the cause.

I am glad I waited closer to the release date of Patti Smith‘s Banga recording (due June 5th) to place my pre-order. I had a premonition that Columbia Records would have a limited edition available. Today I got an e-mail from pattiwmith.net that outlines the final promotional push for Banga.

I am excited that there is so much to read, view, hear and absorb when it comes to Banga. In true Patti Smith form it is a work of art, with many objects of literary inputs to study and pursue. Its going to be great to immerse in the enrichment Patti Smith, her group, music collaborators and her video documentarian, Steven Sebring will be offering us. It’s also a family affair with Jesse Paris, Patti’s daughter and her son Jackson, playing guitar on this recording.

Rather than my repeat what has already been shared with Patti Smith fans, click on this Web link to see why I am so pumped about Banga the limited edition, the new videos and so much more!

I can’t wait to give Banga a full listen and sit down with the hard cover book including 64 pages of original images, complete lyrics and liner notes.

Its music as it should be, a work of art and ongoing education about  the literary world that begs us to explore and discover its wondrous universe.

Patti Smith has an incredible knack for choosing just the right gems in Bob Dylan’s treasure chest of songs.

This first became clear to me when I purchased Twelve in 2007.

The song  by Bob Dylan that Patti Smith chose to cover on Twelve was “Changing of the Guards” from Street Legal (1978).   The song has a depth that is at times beyond description and meaning.  I can’t tell you how many times we’ve played and replayed that track try to discern what the song is about.  Each time we get caught up in the imagery of knights, chivalry and England, enjoying the pageantry but never solidifying the tale. Dylan once commented: “It means something different every time I sing it. ‘Changing of the Guards’ is a thousand years old'”.[1]

I owned Street Legal on vinyl in 1978 but somehow the sands of time erased that song from my consciousness. It wasn’t until Patti Smith sang and then polished this gem with her band on Twelve that I gained the appreciation for the magnificent imagery this song portrays for the listener

In 1995, my band toured with Bob Dylan along the East Coast. He relayed, through his people, that if I chose one of his songs, we could sing it together. All night long I contemplated what I should choose, and how I might sing it. I chose “Dark Eyes,” a relatively obscure song with a lyric worthy of William Blake. Each night he would call me to the stage, and we sang it side by side, so close that at times beads of sweat dripped from his lashes to my cheek. I have tried many times, without success, to write a song to Bob Dylan, to express my gratitude for all he has given us through his work. But perhaps, having been faithful in my own way, from afar since I was 16 years old, is song enough.

Again I am taken with a gem that Patti Smith hand-picked by Bob Dylan. I have listened to John Wesley Harding often yet this song escaped my grasp. I will be listening more intently now through Patti Smith when I get this recording. 🙂

I bought it because it has Patti Smith performing, “Words of Love”.

From NPR, All Things Considered, The Blog

I was taken by Patti Smith‘s version of “Words of Love,” a song I first heard performed by The Beatles and a song that was always pop. Smith slowed the song down, turning it into an impassioned and rousing ballad.

We asked Smith about her attraction to the music of Buddy Holly and the song “Words of Love.”

What I find so interesting about him… In a certain way, he was a teen idol and a pop star, but he had a certain amount of arrogance about him. Of course, he was young, so he would have that, but that was a unique thing for a pop idol; they were so clean-cut often in their demeanor. He just had this edge to him, to the way he presented himself, his songs and his vocal — it was a little bit more aggressive in a certain way.

On the song “Words of Love”:

The decision to do “Words of Love” was due to the vision of Tony Shanahan, our bass player and producer, because he knows me so well and knows I love to slow songs down and find an interesting twist to them. It was Tony’s idea to make it more atmospheric and to lighten it. I was very charmed by his idea, and that’s how we came to do it. My Spanish is, of course, not stellar, but it was really done with a thought to Buddy Holly’s wife, Spanish being her first tongue. One could imagine that he wrote the song for her, and we wanted to remember her and acknowledge her in the song. That was my small contribution to the song, because, really, the fellas did all of the work.

We do a great live version of “Not Fade Away,” but I’m glad we did “Words of Love.” It brought out another aspect; it’ll be unexpected.

We celebrated a great year with you in 2010. First we saw you and Sam Shepard reading from your new books at the 92nd St Y. Then you autographed your book, Just Kids for us :). We love the book.

Then in November we saw you at the Metropolitan Museum of Art with your daughter Jesse on piano,Michael Campbell on vibes/guitar, and Lenny Kaye on guitar/vocals. You were so entertaining, honest and engaging in that setting,.

We were so enthralled when you received the National Book Award for Just Kids.

Happy Birthday Patti Smith, have a great concert at the Bowery Ballroom tonight!

We look forward to seeing you at the 92nd St Y this week for more emphatic readings and your  music which is righteous to witness and share.

We are anxious to hear and learn more about your new album which is releasing sometime in 2011. We hope you will feature a song or two as a preview this week 😉

I love the momentum that swirls about Patti Smith as her artistic muse gathers collective energy. We become swept along in a mystical undertow that bathes us in warm, foamy waves of surf and sandy beach. Patti Smith radiates a wonderful aura of light interpreted through her varuousartistic mediums, music, writing, art and poetry. Its a sheer delight to dance along with our artistic muse in total spontaneity. Patti Smith nurtures in us new levels of cerebral intelligence with her gift of art this holiday season.

Where do I begin to define the essence of her latest happenings as I unveil some of Patti Smith activities in late December 2009/ January 2010 and beyond….

I’ll commence with her 63rd birthday on December 30th, PBS is airing on POV (Point of View) the documentary filmed so lovingly, Dream of Life. Steven Sebring spent 11 years capturing Patti Smith’s life for us to witness in an unveiled, revelatory fashion.

If you love art exhibits be sure to include in your travels the newly announced Patti Smith and Steven Sebring art exhibition Objects of Life that will take place from January 6th through February 6th, 2010 at the Robert Miller Gallery, 524West 26th Street, New York City, NY.

Patti Smith’s new book Just Kids becomes available on January 19th, 2010. Patti Smith will be promoting her book extensively January through the end of March in 2010.

For a complete itinerary of Patti Smith’s 2010 global appearances go to her Web site.