This is when best of music book lists appear to help readers with holiday gift suggestions.

I read these best music book lists to see if my purchases appear on critics radar screens. These lists point out valuable music books I have missed and wish to add to my music library.

I have read several best of 2018 music book lists in the past two weeks. I keep returning to  The 2018 Music Book Gift Guide from Paste Magazine Top 10 list.

If you are a music journalist you will appreciate this book’s tongue in cheek approach. (I’m sorry was that a cliche’?)  The use of illustration and narration create a novel method of writer reinforcement.

I’d love to rent a custom RV and travel to the Southern states. The additional benefit of this publication are all the great tourist attractions featured inside. I have quite the itinerary planned 😉

Tryon-native Nina Simone, one of the most important artists of the twentieth century, graces the cover in a portrait by Jim Blanchard; Simone is the subject of a feature essay about artistic influence and identity, written by poet Tiana Clark.

The issue comes with a 28-song sampler of recordings by North Carolinians sourced across nearly a century. The compilation highlights music from NC legends like Simone, Thelonious Monk and John Coltrane, Earl Scruggs and Doc Watson, James Taylor, and Elizabeth Cotten, plus a wide-ranging host of others. Accompanying the sampler are detailed liner notes and essays on the songs by Ron Rash, Laura Ballance, Randall Kenan, and others.

The issue, available for pre-order in their online store (link above), will mail to subscribers on November 6, and will be available on newsstands nationwide on November 20.

I discovered a journalism project that validates the joy vinyl music provides our listening experiences.

The coffee table book, Why Vinyl Matters is part history, part future forecasting, part nostalgia and all celebration. A collection of more than 25 interviews, all illustrated with photos, sidebars, quotes, album covers, outtakes and much more. This is the book for anyone who has ever gone to the store and bought music on vinyl.

The author of this enlightening research is Dr. Jennifer Otter Bickerdike. Dr. Bickerdike is a media and music academic, specializing in fandom, the cult of dead celebrity, pop culture, and music. She is the head of music journalism at The British and Irish Modern Music Institute.

Why Vinyl Matters is not just about waxing (HA!) nostalgic about the format; it is about the special and unique way that records bring us together in unexpected and magical ways.”—Jennifer Otter Bickerdike

I’ve come to respect how prolific and authoritative David Hepworth is as a music journalist. I published a blog post last year about his earlier book, 1971: Never A Dull Moment. A pivotal year in rock music.

His new book is titled, Uncommon People: The Rise and Fall Of The Rock Stars.

The latest book, “Uncommon People,” takes in the genre through a broader lens, 1955 to 1995, charting the rise and fall of the rock star as a species over that time.

An elegy to the age of the Rock Star, featuring Chuck Berry, Elvis, Madonna, Bowie, Prince, and more, uncommon people whose lives were transformed by rock and who, in turn, shaped our culture

The age of the rock star, like the age of the cowboy, has passed. Like the cowboy, the idea of the rock star lives on in our imaginations. What did we see in them? Swagger. Recklessness. Sexual charisma. Damn-the-torpedoes self-belief. A certain way of carrying themselves. Good hair. Interesting shoes. The talent we wished we had. What did we want of them? To be larger than life but also like us. To live out their songs. To stay young forever. No wonder many didn’t stay the course.

I was recently listening to the Joni Mitchell box set, The Studio Albums, 1968-1979, tuning in to her jazz period with bassist Jaco Pastorius. Specifically, the recordings, Hejira, Don Juan’s Reckless Daughter, Mingus and the live concert double LP, Shadows and Light which represents a lucrative jazz interval.

This created a strong desire for me to dig deeper into Joni’s extensive muse. I wanted to learn more what motivated her to transition from folk singer/songwriter to intricate jazz phrased poetry.

A new biography, Reckless Daughter: A Portrait of Joni Mitchell by David Yaffe. provides many more revelations about that creative era.

Yaffe was granted extraordinary access to the famously standoffish Mitchell, as well as to many of her closest friends and collaborators, including Wayne Shorter, Herbie Hancock, Joan Baez, David Crosby, Judy Collins, and the late Leonard Cohen. Making the most of his proximity, he pulls off the feat that has eluded so many of his predecessors: He forges an intimacy with Mitchell on her own, uncompromising terms by truly listening to her, as closely and as generously as she’s always deserved.

This is a book I can’t wait to savor. I’m appreciative of David Yaffe sharing the artistic wealth. 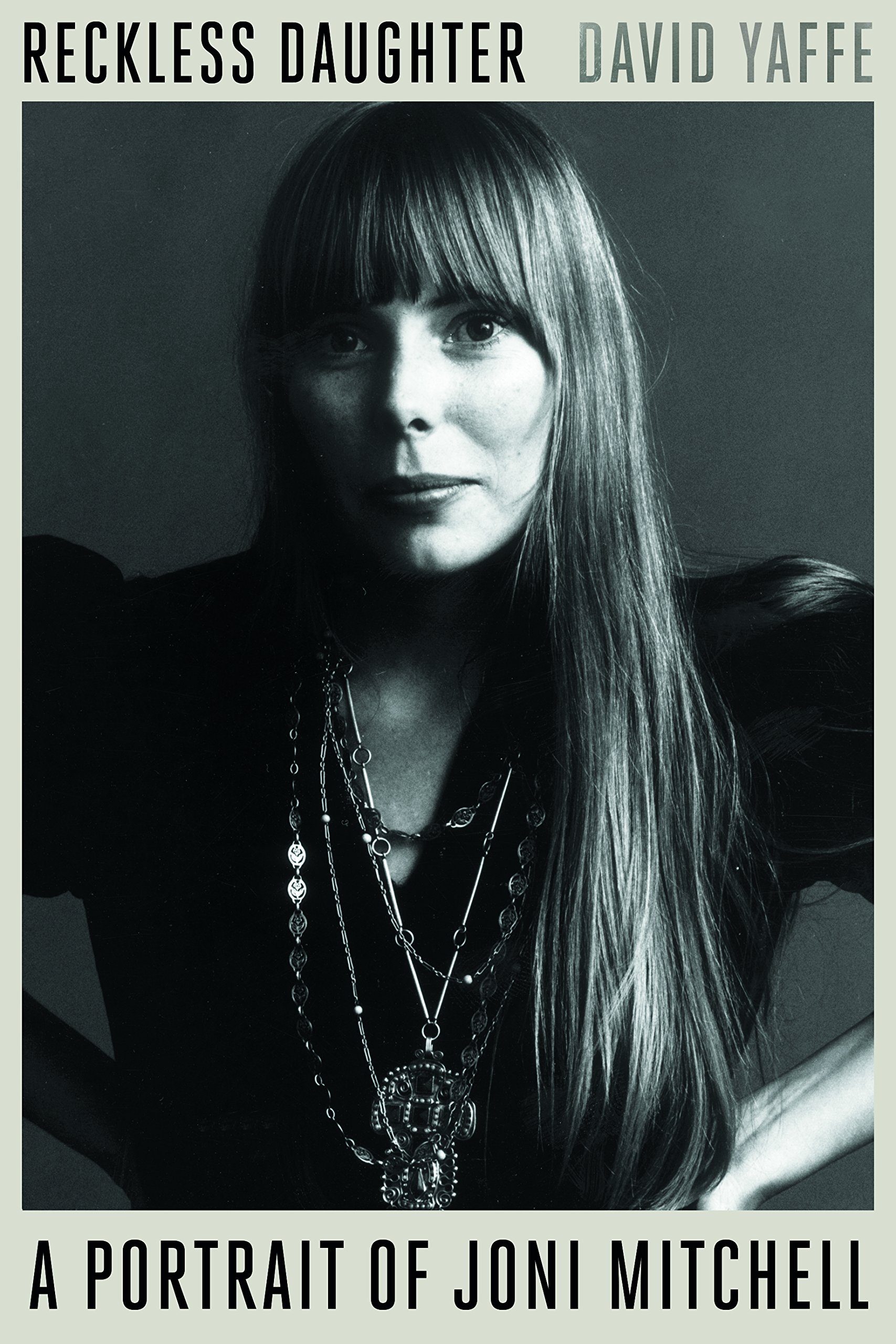 Wishing that I had the money and time to travel to Seattle, Washington this year for the Museum of Pop Culture, Pop Conference. My favorite music museum coupled with the premier music journalists conference! Voila 😉

Pop Conference 2017 kicks off with Artist Interview: A Conversation with David Byrne. This year’s conference theme is “Sign O’ the Times: Music and Politics” and Byrne will discuss his critically acclaimed musical Here Lies Love, which traces the non-violent restoration of democracy in the Philippines in 1986 and follows the meteoric rise and dramatic fall of the controversial First Lady of the Philippines, Imelda Marcos.

I’m never quite sure what the event accomplishes, especially with this year’s theme, exclusive of the fact it is one of the largest music journalism conclaves where opinions abound from writers profound.

I identify with this event as an amateur music journalist. I keep hoping when I get to retirement I can join this nucleus and have authored a music book. I have the Pop Conference speaker objective, esoteric as that may be, on my bucket list.

The passing of Nat Hentoff on January 7th left a discernible void in music and free speech. I have been richly educated by his writing for many decades. The NY Times published an article about his life that I encourage you to read, Nat Hentoff, Journalist and Social Commentator, Dies at 91.

What struck me was this photograph of him at his craft. Notice the use of the typewriter in Nat Hentoff’s Greenwich Village apartment/office. I will make it a point to rent the David L. Lewis documentary, The Pleasures of Being Out of Step and watch it in his honor.

For me  it’s always been “debatable” has SiriusXM provided innovative and compelling programming options?  Years ago they launched subscriber based satellite radio. Howard Stern aside,  I think they have struck flint from time to time with the Bob Dylan* and Tom Petty channels where these two illustrious musicians have served as disk jockeys. Those broadcasts have been enlightening as we gain insight from music subject matter authorities who have written the songs that harmonize our lives. (*Bob Dylan was awarded the Nobel Prize for Literature 2016)

The channel features an interesting cross-section of distinct music aficionados, personalities and unique music characters. To my way of thinking that is novel programming and my goal is to promote what bodes to be a worthwhile experiment.

The first show on the Volume channel that has caught my attention will feature a music journalist I respect, Alan Light and one of the original MTV music video jocks (VJ) , Mark Goodman. They will be hosting a program called Debatable.

Every true music fan has gotten into an argument with their friends discussing topics like: Who is the best lead singer of all time? Is KISS better than Mötley Crüe? Who is the best MC of the 90’s? Each afternoon, legendary MTV VJ Mark Goodman and former Spin and Vibe editor Alan Light will attempt to answer these questions on Debatable with the help of celebrity guests, listener phone calls and social media posts.

Curious to hear how this goes as a SiriusXM subscriber.

Brian Wilson’s musical genius sustainability are his and our remarkable treasures. His new memoir takes us into his creative muse. Isn’t that what we want to learn about Brian’s talent? The thought process behind such great classics as “Good Vibrations” and “God Only Knows”.

I Am Brian Wilson,  written by Brian Wilson with music journalist Ben Greenman will be available on October 11th from Da Capo Press.

I Am Brian Wilson is the story of Brian Wilson’s life, told by Brian Wilson. But he’s not the same man who had a nervous breakdown on an airplane in 1964 or the one who ballooned to 300 pounds and couldn’t get out of bed in the 1970s. This Brian Wilson is older, calmer, filled with perspective regarding his extraordinary accomplishments and forgiveness for the people who complicated those accomplishments, and his life. Wiser, more measured, though still possessed of the youthful spark that helped him rise to the top of the rock and roll world, Wilson relates his life with a level of emotional honesty that has eluded authors of scores of previous works on Brian and The Beach Boys: “Telling my story honestly means remembering things I sometimes prefer to forget. I would like people to get to know what I’ve gone through, and I hope that my story will give them strength.”

LIFE IS A RIP OFF: THE COMPLETE BOOK is 404 pages and 12 months of record reviews—one record a day, every day, for one year. Yes, John “Inzane” Olson aka Inzane Johnny of the band Wolf Eyes aka American Tapes did that. And he reviewed everything from death metal demo cassettes to the Staples Singers’ gospel. Enter into the OLZONE and find out about music you’ve never known, bands from places that you’ve never heard, and then read his review of KANSAS. Reading LRIP will make you re-realize why blues is relevant, why every punk band in America matters, why jazz is good for the heart, and metal will always ride by your side.

John Olson joined the seminal noise, trip-metal band Wolf Eyes in 2000. Wolf Eyes has toured and/or worked with musicians such as Sonic Youth and Anthony Braxton. In 2015, Wolf Eyes released the full length I AM A PROBLEM: MIND IN PIECES on Third Man Records.

WITH ADDITIONAL ESSAYS FROM:

Henry Rollins: Born in 1961 in Washington, D.C., Henry Rollins was barely out of his teens when he joined the legendary punk band Black Flag. He won a Grammy Award for best spoken word album in 1994 for his recording of his memoir, Get In the Van.

Ben Hell Hall: Sculptor and composer Ben Hall creates installations incorporating durational performances, existing objects and indeterminacy.all has written for The Wire and BOMB and has performed at INSTAL in Glasgow, Scotland; the Museum of Modern Art in New York City; and kunstenentrum BELGIE in Belgium.

Bryan Ramirez is an experimental, jazz, noise musician. He has played in several collaborations and groups including Ex-Cocaine. He also runs the Killertrees record label.

Tovah Olson has created something approximating music with Dead Machines, Wooden Wand and the Vanishing Voice and various other projects. She co-founded the Polyamory record label and runs Tovinator. She’s a digital news director and inzane mom living in the middle of Michigan.