Here is a Spotify playlist from Domo Records featuring new age artist Kitaro and others. If you are in need of healing give it a listen.

Music of our Heart, We are one

Reflections of the heart

Right from the very start

Our faith will never be undone

It is Sunday and all is still in the house. I listen in spiritual appreciation to Kitaro’s newest CD, Sacred Journey of Ku-Kai, Volume 5. The next leg of the journey commences.

I am rewarded with a new tapestry of sounds and sensations. It is the perfect backdrop as I prepare my soul to renew my lector assignment at the 11:30 mass. I have been absent from God’s altar for 113 days and I’m eager to renew my stewardship in Christ’s teachings.

Today is the Second Sunday of Easter and the readings support the Gospel according to John, 20:19-31. “Have you come to believe because you have seen me? Blessed are those who have not seen and have believed.”

A gift included with Kitaro’s CD is  Journey to the Heart III, “Music for Healing”. A sampler CD that ties the journey together starting the initial track “Tabiji” from Kitaro’s An Ancient Journey.

I prepare within the music of our heart for the next leg of the sacred journey with Kitaro to Ku-Kai. My soul is yearning to experience the universal peace brought by the bells resounding across the sacred temples.

Kitaro’s Sacred Journey Of Ku-Kai Volume 5 follows the highly acclaimed Volumes 1 through 4 of the series, all of which have earned Grammy nominations.

The Ku-Kai series concept arose after the global events on the fateful day of September 11, 2001. Kitaro was traveling on a jet from Japan to Los Angeles when the transcontinental flight was diverted to Hawaii for five days due to the tragedy. It was during this time of disbelief and uncertainty that Kitaro envisioned the Ku-Kai series as a means of uniting the world through music embracing his frequently referenced universal message of peace.

The Sacred Journey Of Ku-Kai series is an earthly voyage that transports the listener to Shikoku, Japan. It pays homage to the beloved Buddhist holy man Ku-Kai who traveled the 750 mile long pilgrimage to the 88 sacred temples on the island over 1100 years ago. Each track on the album revolves around an audio sample of the bell sound from each temple. With these bell sounds, Kitaro distils their essences with inspired musical interpretations.

It is a beautiful series of music compositions set against rolling space photographs. We are but a mere speck of dust in the holy majestic universe. The images from NASA and other sources gathered by Kazunari Shibata (Kyoto University) display in breathtaking beauty on the 52″ HD TV mounted on the wall connected to the Sony Blu-Ray 7.1 Home Theatre system. The splendor of science prevails.

The collaborative experiment of merging music, Kitaro’s Kojiki and movies of the universe achieves that rare sense of wonder to compel us to discover beyond our planet.

Kitaro continues to expand my consciousness for which I am forever grateful.

Kojiki and the Universe Live Tour

Kitaro’s new DVD, Kojiki and the Universe is an experiment in merging music with movies of the Universe.

Always the innovator, Kitaro will tour the globe in 2017 beginning with an intimate concert on April 20 in San Rafael, California. International performances will then commence in London, Istanbul, Ankara Turkey, Brasov Romania, Bucharest, Sibiu and Sofia. Simultaneously, the Grammy and Golden Globe winning artist will release two new projects, the tour inspired DVD, Kojiki And The Universe and a new music, Sacred Journey of Ku-Kai Volume 5.

Presenting a totally-unique visual experience, the Live in Concert presentation of “Kojiki and The Universe” merges Kitaro’s Grammy nominated music from the album “Kojiki” with dynamic space-age photographic scenes of the Universe. “Kojiki and The Universe Live” features time- lapse images, expertly intertwined with real-time films provided by and in cooperation with NASA and Kyoto University.

The debut of the Live concert experience in San Rafael will offer exclusive and access to the artists via a KITARO VIP EXPERIENCE which includes Gold Circle seating, an intimate wine and cheese post-concert reception with Kitaro, an autographed tour poster, a Kojiki & The Universe DVD signed by the artist and personally autographed copy of Kitaro’s newest Domo Music CD release, Sacred Journey of Ku-Kai Volume 5. 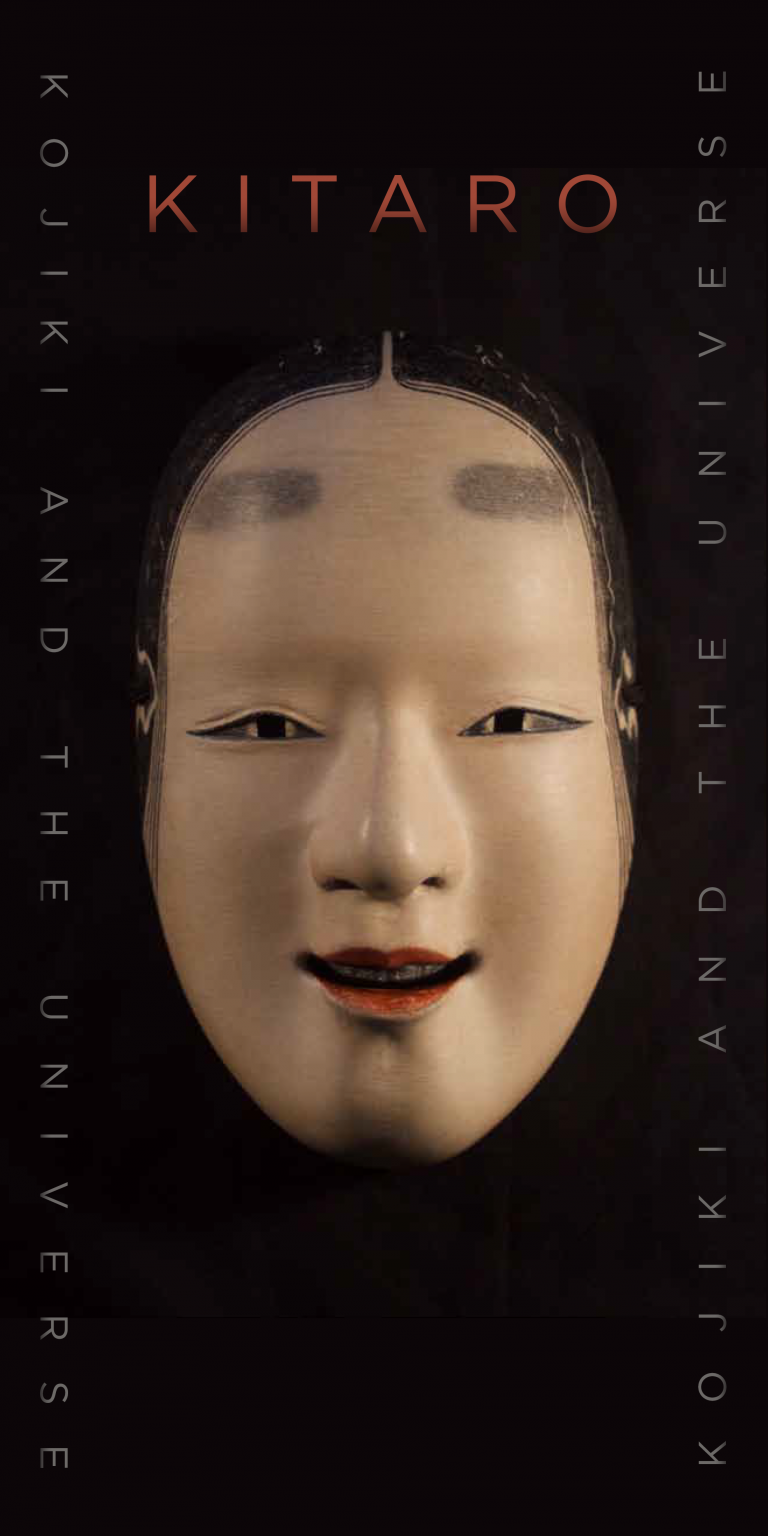 Kitaro’s all new music recording, “Sacred Journey of Ku-Kai Volume 5” is to be released on April 21st following on the heels of the multiple Grammy nominated Volumes 1-4.

Having received Grammy nomination for volumes 1-4, Volume 5 is presented by Kitaro’s long- time label, the Domo Music Group. The Ku-Kai series concept arose after the global events on the fateful day of September 11, 2001. Kitaro was traveling on a jet from Japan to Los Angeles when the transcontinental flight was diverted to Hawaii for 5 days due to the tragedy. It was during this time of disbelief and uncertainty that Kitaro envisioned the Ku-Kai series as a means of uniting the world through music embracing his frequently referenced universal message of peace.

The Sacred Journey of Ku-Kai series is an earthly voyage that transports the listener to the eighty-eight sacred temples located on Shikoku Island in Japan, the ancestral home of the beloved Buddhist holy man Ku-kai. The music, which pays homage to the true to life excursion made over 1100 years ago on Shikoku Island endures to this day. Each track on the album revolves around the unique bell sound from the individual temples, using actual sampling and Kitaro’s inspired musical interpretations and distillations of their essences.

Studying Kitaro’s discography over the weekend has guided me to the collaborative music project, Dream released in 1992. It was an ideal discovery with a renewed focus on Jon Anderson’s creativity curve plus the affinity I possess for Kitaro’s music these past 40+ years.

Take  some time to dream along with Kitaro and Jon Anderson by giving a listen to their musical effort.

Two giants in contemporary music have joined forces to create one of the most awe-inspiring albums of the ’90s. Kitaro has taken his signature style into a new dimension of orchestral drama with three tracks featuring the breathtaking vocals of Jon Anderson, from Yes. Anderson, a longtime Kitaro fan, showed up on Kitaro’s Japanese mountaintop and hung out for a month. Their ensuing “marriage” of vocals and music is the result. Kitaro composed the music while Anderson wrote the lyrics. The songs revolve around the eternal theme of love, as in the transcendental romanticism of “Lady of Dreams” and the ecstasy of spiritual liberation in “Agreement”….This is a special album full of soaring emotion and spiritual upliftment. – Source: All Music

Marking the 30th anniversary of its début, this reissue of Kitaro’s critically acclaimed album “Tenku” has been newly remastered from the original source tapes.

“Tenku”, which translated means “Heavenly Sky”, refers to time spent at his 200-year-old farmhouse in the Japanese Alps, where the album was recorded. Drawing inspiration and his impressions of nature at that time, Kitaro remarked, “Through communicating with nature, I wish to always make music that reflects the warmth that we should have as humans.”

The album became a defining moment in Kitaro’s career, which soon afterwards became his first conceptual album that introduced him to an international audience.

For what is certainly an otherworldly experience; Tenku is a collection of dreamy compositions full of soft Japanese melodies with a hint of melancholy. Kitaro’s immaculate synthesizer technique produces a nuanced yet bold atmosphere that is truly one of a kind.

I have been fortunate to experience rock music artists performing with a full symphony on stage with them. The collaboration of strings, brass, woodwinds and tympani set against rock has been extraordinary. The two concert moments that transfigured the music of our heart were Yes in 2001 (captured on DVD as Yes Symphonic Live) and Jeff Beck in 2010 performing with a symphony group, Nessun Dorma by Puccini, it is an aria from the opera Turandot.

Which leads me to Kitaro, who I have yet to see live in concert. Kitaro is #1 on my list of must see concerts. I’m beginning to think I will have to travel elsewhere in the world to see him perform but I am perfectly willing to do so, 🙂

Recorded Live at the Halic Congress Center in Istanbul, Turkey over two evenings in March of 2014, Grammy and Golden Globe winning artist Kitaro’s “Symphony Live In Istanbul” is breathtaking. The album features new musical material while also including eight of the acclaimed artist’s most requested and popular compositions.

This amazing performance marks Kitaro’s first-ever recording for the Domo Music Group balancing the artists trademark signature sound and expanding it to new heights with the addition of a full live symphony orchestra.

Kitaro noted “In 1980, I began composing and producing music about the passageway and excursions of the Silk Road.  This past spring, I embarked upon my first Symphonic Tour that reached Russia, Eastern and Central Europe and had the distinct pleasure of performing in Istanbul; a place where from ancient times to modern times, has flourished as an important hub of the Silk Road where Europe and Asia meet.”

I stare endlessly at the overlapping concentric circles that form a Mandala. I find myself happily lost in the essence of its design.

I am taken with the Mandalas created by Paul Heussenstamm.

I listen to the title track of Mandala by Kitaro.

I am a long time fan of Kitaro, the foundation architect of new age music. I value the spirituality gained through his musical intonations. He effectively translates the true message of peace by communicating directly with the soul of our being.  He has taught me to respect our environment by forging us as one with our surroundings.

Kitaro is at the top of my list of artists that I wish to experience live. I yearn for the day I am sitting in his midst absorbing the magic of his resonant sound.

Domo Records, Kitaro’s record label has announced that he will be releasing his 23rd studio album, Final Call on September 10th. This album is a voyage of introspection specifically concerned about how we treat our planet. It’s Kitaro’s assertion that the planet itself is crying out and warning us about potential serious consequences if we don’t address these global issues in a timely fashion.

I have always felt we all must respect the providence of the Universe.  Unfortunately, through the course of time and the growth of civilization, many living creatures that we now know will become extinct. If we don’t alter how we treat each other and our planet Earth, many habitats and portions of this earth may become devastated and eventually disappear.

After meeting Professor Shibata, at Kazan Observatory at Kyoto University, nature photographer Mr Toshio Ushiyama and the staff at Nagoya Science Museum, I had an epiphany of sorts. I began to recall the greatness of constellations, our solar system, galactic systems, the macrocosms that they create and the beauty of our planet Earth.

As in the story of Noah’s Ark, this album is the story of an epic voyage.  A voyage of hope that all living creatures can someday live happily in harmony with each other.

The story begins from where we board for departure.