I simply can’t wait to witness this film on the iMAX screen. I believe in Rami Malek. I was thrilled when he won an Emmy for Mr. Robot. This is going to be HUGE!

Legendary Godfather of the Blues, John Mayall will be releasing his first new studio album in five years, A Special Place on Forty Below Records on May 13, 2014. It is considered to be one of the finest and most personal records of his career.

John Mayall goes back to his roots on the new album with an eclectic mix of songs centered in the blues, but with diversions into rock and Americana.

Backing Mayall on the new album are Texas guitarist Rocky Athas and a Chicago-based rhythm
section of Greg Rzab on bass and Jay Davenport on drums.

Accordion legend C.J. Chenier makes a powerhouse guest appearance on a couple of tracks,
including the opener, “Why Did You Go Last Night,” written and previously recorded by his
father, Zydeco Icon Clifton Chenier.

We live right off the Metro North train line in Connecticut. It was easy to hop the 9:38 a.m express and get into Grand Central Terminal at 11:15 a.m. The Grand Hyatt is right next door to GCT where we entered The Fest for Beatles Fans 2014.

We decided to attend the day in between the two major Beatles 50th Anniversary events, the Beatles Invasion February 7th and the Ed Sullivan broadcast on February 9th.

After we checked in we headed up to the main ballroom on the 4th floor. We watched the balance of the film, Good Ol Freda which was a special treat as Freda Kelly herself appeared after the film. She brought a tear to my eye as her role in The Beatles family is devout, private but very caring. You could see how much she loves the fans as she met with them at the autograph table.

Our focus for this event was the music in the main ballroom. Granted there were floors of art exhibits, video, presentations by authors etc. But we got anchored to the concert floor. The event was oversold and many people had to stand which made for a fire law problem. This meant we had to pretty much stay in our seats all afternoon which grew uncomfortable over 6 hours.

Ken Dashow interviewed Mark Rivera who has performed with three of the Beatles, John Lennon, Sir Paul McCartney and Ringo Starr. Mark is Ringo Starr’s Musical Director for the Ringo Starr All-Starr Show where we’ve seen Mark play three times this past decade. Mark Rivera is also a band member of Billy Joel‘s band. He has a new album coming out, Common Bond which drops on February 18th.

The album includes a rare appearance by Billy Joel playing a sizzling Hammond B3 organ on Mark’s unique cover of the Jimi Hendrix classic Spanish Castle Magic. Ringo Starr, Robert Randolph, Nils Lofgren and Steve Lukather all give their great talents to what will be a most cool album!

It really rocks in a good old way – like we did back in the day. Your voice sounds great and the band kicks ass!”– Billy Joel

Gretsch Presents, Peter Asher, A Memoir of the 60’s and Beyond – Part 1

We were pleasantly surprised by Peter Asher. He had a well-polished agenda for us. This speaks to his role as a producer. He interspersed his verbal talk which was filled with nostalgia about The Beatles with vintage video. He had a class back up band that increased the dimension of the Peter and Gordon songs. The Eric Idle introduction was funny. We especially loved the segment where Peter sang with Gordon behind him as they played. It was so comforting to hear them sing together that way with Gordon Waller having left us in 2010.

I was intrigued to learn that Peter and his sister Jane Asher had founded a book store and art gallery Indica in London where John Lennon met Yoko Ono at her art show.

We were surprised by Pattie Boyd’s appearance. It was a warm, intimate 40 min conversation with Pattie and Martin Lewis where Pattie spoke about George Harrison, The Beatles in the day, the trip to India and her love of photography. I thought she was a delight and very honest interview subject.

It was a joy to see Donovan perform. It had been 44 years since our last Donovan concert. This show was very immediate. We loved the magic he created for us. Donovan has always been a special artist in the music of our heart.

He was in good voice. I especially loved how he sounded phrasing wise especially on “Jennifer, Juniper”. I really dug with unique vocal sound he makes on “Hurdy Gurdy Man”. His one hour set went so quickly but he played all his hits which made it loving and lasting for us.

We were really happy to hang out with Cousin Brucie who has been a major force in our music listening lives. He has such energy and passion for what he does as an on-air personality. It was exciting to be part of his live SiriusXM broadcast. We often listen to his show on Sixties on 6.

We didn’t stay for the three-hour show as we were weary from the ballroom chairs. We figured we’d listen to the rebroadcast on Sunday night from 5-8 p.m. Which we are listening to that show now as I finish up that post 😉

I finally got to see Ronnie Spector live which was cool! Ronnie had some great stories about the boys and Murray The K. She then performed “Be My Baby”.

Donovan rejoined us next and paid Brucie a wonderful complement as a disk jockey. He performed “Hurdy Gurdy Man” and it was great to hear it twice in the same day! 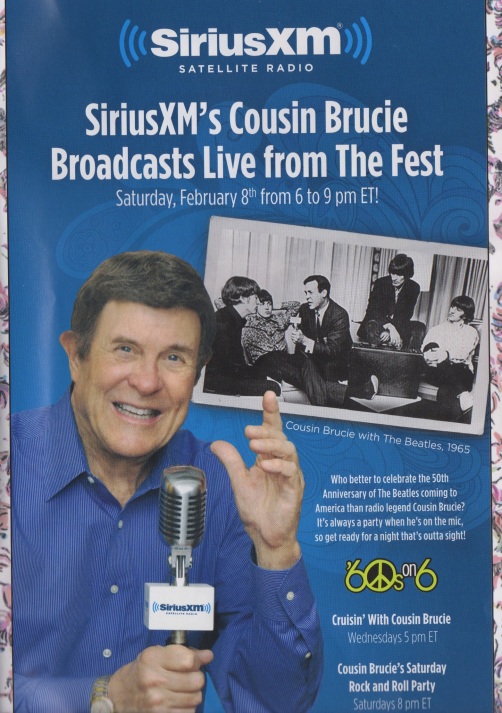 Cousin Brucie, “We Love You!”

Rod Stewart was the first British Rock lead vocalist I ever saw in concert. I saw Rod Stewart as lead vocalist for The Jeff Beck Group on July 3, 1969. I remember he was quite the dandy. He was tall and strutted across the Fillmore East stage wearing a long white scarf. His voice was very commanding to match his stage presence.

So here we are later in time and I am writing about Rod Stewart’s soon to be released new album, Time (May 7th).

It’s interesting how much has changed in 44 years. I discovered Rod Stewart by accident actually as my goal that night at The Fillmore East was to see my favorite band at the time, Jethro Tull. I didn’t own a lick of Jeff Beck or Rod Stewart’s music before the show. I purchased Beck-Ola on the way to the Subway at The Gramophone.

Today I receive an e-mail from the Rod Stewart mailing list that informs me of the forthcoming album. I navigate with my Web browser to the Rod Stewart Official Website and I become informed about Time and its contents there. I also see that YouTube serves as the video preview point globally for Rod Stewart’s Time. Last but not least I don’t have to leave my easy chair to buy the recording because I can pre-order it  on iTunes or Amazon. Rod Stewart in Internet Time indeed.

When you hear the name Jeff Lynne, the words respected musician, composer, collaborator and producer come to mind. He is returning to the music scene with two very special recordings on October 9, 2012. I welcome his efforts with renewed anticipation and internal excitement.

The first recording is his first solo album in 20 years, Long Wave.

“I call this new album Long Wave because all of the songs I sing on it are the ones heard on long wave radio when I was a kid growing up in Birmingham, England,” Lynne explains. “These songs take me back to that feeling of freedom in those days and summon up the feeling of first hearing those powerful waves of music coming in on my old crystal set. My dad also had the radio on all the time, so some of these songs have been stuck in my head for 50 years. You can only imagine how great it felt to finally get them out of my head after all these years.”

The other recording is Mr. Blue Sky – The Very Best of Electric Light Orchestra.

Here Lynne has artfully revisited and re-recorded the greatest hits of Electric Light Orchestra, and actually improved on some of the most classic and beloved recordings ever.

Jeff Lynne has also reunited with former ELO band mate Richard Tandy.  Videos of the pair performing “Showdown” and “Evil Woman” have been posted to elo.biz.

“There was a big reason I wanted to re-record these ELO songs,” says Lynne. “When I listen to the old versions they don’t sound the way I thought they did when I first wrote and recorded them. I wanted to use the experience I’ve gained producing records ever since and have a completely new try at them. I’m not saying the old versions aren’t good; I like them very much. We were doing our best, but experience and technology also play a big a big part, and these new ones sound much more solid and tight.”

The album includes a never-before-heard bonus track, ‘The Point Of No Return,’ and a very special version of ‘10538 Overture’ that’s a nod to ELO’s 40th anniversary.