As my readers know I love to write about The Doors. It’s been an interesting Doors 50 year anniversary celebration which has sprawled from 2017 into 2018 thus far.

The song was originally a poem written by singer Jim Morrison about the street in the Laurel Canyon section of Los Angeles, California where he lived with his girlfriend Pamela Courson. Their address was 8021 Rothdell Trail. Morrison and Courson referred to Rothdell Trail as “Love Street” because they would sit on the balcony and watch countless hippies walk by.

You can take a visual tour of the Love Street house by looking at the Zillow Real Estate listing here. The present value of this property is 1.7 Million but it is off the market right now.

I have been to Laurel Canyon and seen the Love Street house. It was a pilgrimage I experienced on my birthday in 2012.  I had lunch (A veggie sprouts and humus sandwich and an ice cream bar) at the Canyon Country Store. Here are the lyrics in Love Street that refer to that store.

To commemorate the street’s significance to popular culture and to Laurel Canyon’s deep music roots, Council Member David Ryu (CD4) sponsored an ordinance to officially change the name of a portion of Rothdell Trail to “LOVE STREET”!

I love the special connection I always feel with Laurel Canyon in the music of our heart.

Although I never saw the original Doors live in concert, I would love to own this reproduction of their 1968 concert program.

The band has reprinted their original 1968 Doors concert program for the first time, which is available exclusively from The Doors Web store. This was the only official tour program ever created by the band.

Produced in 1968 for their upcoming U.S. tour, but sold only at a few select shows, and via mail order. Designed by Paul Ferrara, this 24-page program includes many color and black & white images taken by Ferrara, plus poetry by Jim Morrison, astrology charts for each band member, and more.

I collect music pins. This is the latest addition to my memorabilia collection.

Someday I will feature more of my collection 🙂

It’s a hefty claim that the music of 1968 was rock and roll’s greatest year. Time Life’s editors conducted an admirable job substantiating that belief.

The 10 albums that defined that year are all a part of my vinyl collection and receive regular listening.

The Doors will celebrate the 50th anniversary of their third album, Waiting for the Sun (released on July 3rd, 1968) with a reissue featuring 14 previously unreleased tracks. The two-CD, one LP set is available to pre-order ahead of its September 14th release via Rhino.

The 50th anniversary version of Waiting for the Sun features a remastered version of the album’s original stereo mix on both CD and 180-gram vinyl. Bruce Botnick, the Doors’ longtime engineer/mixer handled the remaster using the original master tapes. 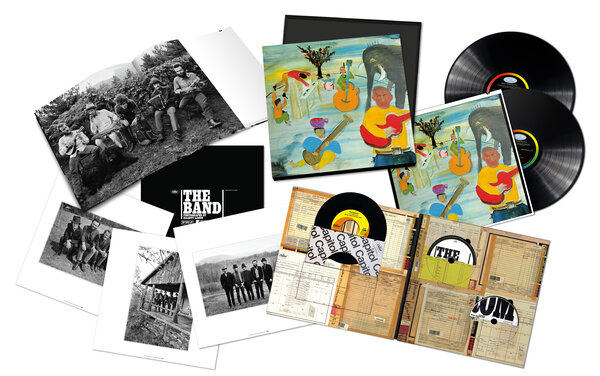 Purple and Rock are two of my all favorite expressions. The latest issue of Classic Rock Magazine (June 2018, Issue 249) features extensive coverage about the Deep Purple Family. There was a period of time when they were the pinnacle of rock.

I have been a Deep Purple fan since ’68 when I first heard their hit single “Hush” on progressive rock radio (WNEW-FM, 102.7, NYC). “Hush” celebrates its 50th anniversary in June. Amazing.

This issue is a in-depth read, 28 pages to be precise. Starting with Deep Purple, then onto Dio and Rainbow, followed by Coverdale & Whitesnake, and more… A total steal at $3.99!

Kudos to Sian Llewellyn, Editor and her team of writers. This is rock curation at its finest!

Yes is a progressive rock band that I return to often as their music echoes as poetry in the Music Of Our Heart. I obtained this issue of The Ultimate Music Guide Yes via the Uncut North America Digital Magazine Music Store. I couldn’t find it in my local magazine rack at Barnes & Noble.  Isn’t that what my iPad Pro and the Web is designed to accomplish 😉