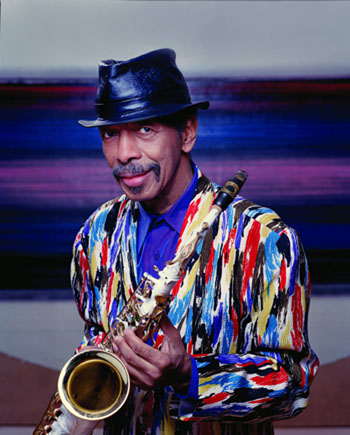 Randolph Denard Ornette Coleman (March 9, 1930 – June 11, 2015) was an American jazz saxophonist, violinist, trumpeter and composer. Born and raised in Fort Worth, TX, he was one of the major innovators of the free jazz movement of the 1960s, a term he invented with the name of a 1961 album. From the beginning of his career, Coleman’s music and playing were largely unorthodox. His approach to harmony and chord progression was far less rigid than that of bebop performers; he was increasingly interested in playing what he heard, rather than fitting into predetermined chorus structures and harmonies. His raw, highly vocalized sound and penchant for playing “in the cracks” of the scale led many Los Angeles jazz musicians to regard Coleman’s playing as out-of-tune. He sometimes had difficulty finding like-minded musicians with whom to perform.

Coleman originally intended “Free Jazz” as simply an album title, but his growing reputation placed him at the forefront of jazz innovation, and free jazz was soon considered a new genre, though he has expressed discomfort with the term, as his music contains a considerable amount of composition. Coleman’s melodic material, while skeletal, strongly recalls the melodies that Charlie Parker wrote over standard harmonies, and in general, the music is closer to the bebop that came before it than is sometimes popularly imagined.

After the Atlantic period and into the early part of the 1970s, Coleman’s music became more angular and engaged fully with the jazz avant-garde which had developed in part around his innovations. The mid-1990s saw a flurry of activity from Coleman: he released four records in 1995 and 1996, and for the first time in many years worked regularly with piano players.

In September 2006 he released a live album titled Sound Grammar with his newest quartet. This was his first album of new material in ten years and was recorded in Germany in 2005. It won the 2007 Pulitzer Prize for music, Coleman being only the second artist to win the award.