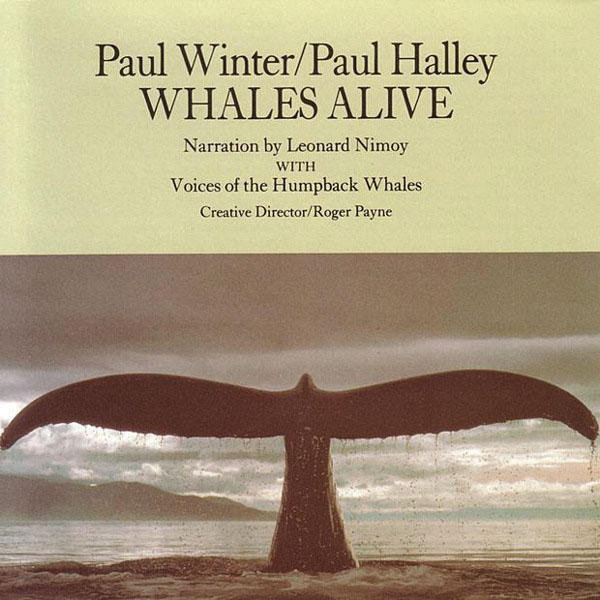 The Nantucket Historical Association (NHA) is pleased to welcome special guests Paul Winter and Dr. Roger Payne for a legendary one-night concert on Wednesday, August 31, 2016 at 7 P.M. at the Whaling Museum, 13 Broad Street.

Paul Winter is a saxophonist and composer, and seven-time Grammy winner. Dr. Roger Payne is the biologist famous for the discovery of humpback whale songs in the 1960s, and an environmentalist who has played a major role in the worldwide campaign to end commercial whaling. The two have collaborated for decades in creating music inspired by the whales, interweaving these extraordinary voices into the fabric of the music.

This special “Whales Alive” concert features music based on themes from the songs of the whales, interwoven with the whales’ voices. It will include the finale from the Winter/Payne album Whales Alive, featuring Payne’s poem “The Voyage Home,” narrated by Leonard Nimoy. Dr. Payne will tell of his adventures recording whales since the mid-20th century, and also speak about the ongoing challenges whales still face, as well as pollution in the world’s oceans.

“In the past, whales were valued as a commercial product on Nantucket,” says Paul Winter. “It will be a privilege to come here now and celebrate the beauty of living whales and their iconic voices in the present day.”

As described by Winter and Payne in the “Whales Alive” album liner notes, “Whale songs, in this short while since they have come into our culture, have touched the hearts of a human audience so large that whale-watching is now a bigger business than whale-killing. We have come to value their living beauty more than their dead bodies. They have helped us mature, and to acquire humility, as our consciousness has grown from “Save the Whales” to “Saved by the Whale.” ‘Whales Alive’ is a celebration of optimism, and our song of gratitude to whales for the beauty and wisdom they have brought into our lives.”

Paul Winter’s musical odyssey has long embraced the traditions of the world’s cultures, as well as the wildlife voices of what he refers to as “the greater symphony of the Earth.” From the early days of his college jazz sextet, which toured Latin America for the State Department and performed the first-ever jazz concert at the White House for the Kennedys in 1962, to his later ensemble, the Paul Winter Consort, his concert tours and recording expeditions have taken him to 52 countries and to wilderness areas on six continents, where he has traveled on rafts, dog sleds, mules, kayaks, tug-boats and Land Rovers.

Winter has recorded 45 albums, of which 7 have been honored with Grammy® Awards. Since 1980, Paul and his Consort have been artists-in-residence at New York’s Cathedral of St. John the Divine, where they have presented over 200 unique events, including their famed annual Winter Solstice and Summer Solstice Celebrations. Paul’s current project is “Flyways: A Celebration of the Great Bird Migration from Africa through the Middle East to Eurasia” which will incorporate indigenous music of each of the sixteen countries over which the birds fly, interwoven with the voices of the birds.

Dr. Roger Payne is best known for his studies of whales in the wild. He has an AB from Harvard and a Ph.D. from Cornell. He is best known for his co-discovery (with Scott McVay) that humpback whales actually sing songs. His 1971 article in National Geographic magazine included a playable recording of whale songs.
Payne has led over 100 expeditions to all oceans and studied every species of large whale in the wild. He pioneered many of the benign research techniques now used throughout the world to study free-swimming whales, and he has trained many of the current leaders in whale research, both in the US and abroad. Payne has lectured at most major U.K. and U.S. universities, and from 1971-1990 appeared on most major TV and radio talk shows, as well as being the subject of more than 40 television films. Payne was also featured in the 2015 Jane and Payne, exploring his friendship with Jane Goodall.
This concert is being presented with the generous support of the Hall-Froelich Foundation.
Admission to this incredible evening is only $10 per person for the performance, with limited $50 tickets available for the performance and a reception immediately following. All tickets are on sale now at www.nha.org/tickets.