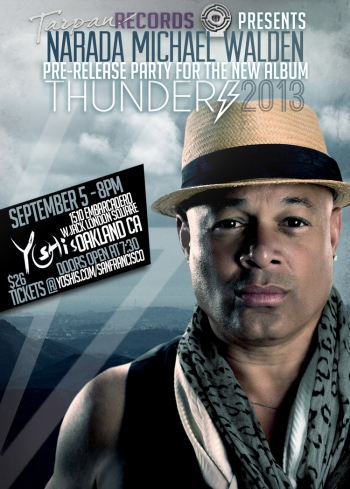 Wishing I could be in Oakland, California at Yoshi’s tomorrow evening September 5th to attend the pre-release party for Tarpan Record’s owner and consummate artist, Narada Michael Walden‘s album. Thunder 2013. Know that I am there in spirit. My enthusiasm goes out to my friend Steffen Frantz, who I am proud to share with the readers of this music blog, recently became President of the Tarpan Records label. I wholeheartedly agree with Narada Michael Walden’s choice for his top executive 🙂

Thunder 2013 is due to drop on Tuesday September 17th. It’s a vibrant recording with a unique depth of soul that peacefully envelops the music of our heart.

“Brother Narada’s new sound is young and vibrant. Listening to Thunder, is uplifting and transforming! Narada’s vision is powerful with lots of soul. It is a tapestry of vibrant ideas, universal tone and the great vocal hooks that he is known for. This album rocks hard-core with supreme light and raw energy divine.” – Carlos Santana

My favorite track so far is “Dreams of Vinyl” 🙂

I last saw Narada Michael Walden live at Madison Square Garden on February 18, 2010. He was playing drums for Jeff Beck that evening. The group featured selections from Jeff Beck’s Emotion, Commotion, months before its release. I was  totally blown away by what I heard and experienced.

I get a similar feeling plus more from Thunder 2013. It has great feel flow. Give it a listen on Sound Cloud, you’ll crave the vibe 😉