My wife and I love to listen to Jimmy Webb in concert. He is an engaging story-teller and songwriter.

“MacArthur Park” turned 45 years old this year and Jimmy Webb finally got to do it in the real park in the Westlake neighborhood of Los Angeles, California on Saturday June 15, 2013. 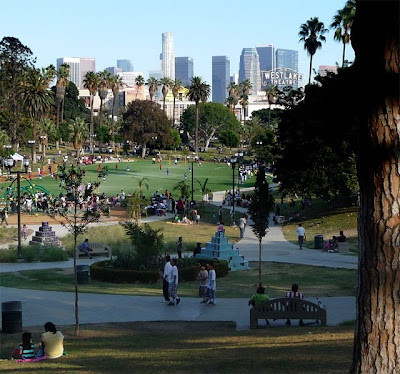 The inspiration for “MacArthur Park” was the relationship and breakup between Webb and Susan Ronstadt, a cousin of singer Linda Ronstadt. MacArthur Park was where the two occasionally met for lunch and spent their most enjoyable times together. At that time (mid-1965), Ronstadt worked for a life insurance company whose offices were located just across the street from the park

Webb says Beatles producer George Martin told him that “MacArthur Park” influenced the Beatles’ decision to let “Hey Jude” run beyond the 7-minute mark when they recorded it a couple of months after Harris’ record became a hit.

Now, half a century down the line, the composer believes the world is ready to hear it at least one more time.

“I have it on my new record coming out in September,” Webb said, noting that his recording for his new “Still Within the Sound of My Voice” album due Sept. 10 features a vocal arrangement by one of his musical heroes, Beach Boys creative leader Brian Wilson. – Courtesy of the LA Times