Today’s blog post continues the theme of music legends of the 70’s with Harry Nilsson. The 70’s were the most fruitful and embryonic decade for the music industry. The singer/songwriter hatched from the egg of rock music to give us an unparalleled dimension of songs and lyrics.

I happened to catch the PBS Special, Who Is Harry Nilsson (and Why Is Everybody Talkin’ About Him?) last night on WNET‘s THIRTEEN which celebrates its 50th Anniversary this year. I have been rewarded many times over the decades with valuable music content from this award-winning public television station.

You owe it to yourself to become enchanted by the magic of Harry Nilsson. There are many revelations about Harry Nilsson and his circle of friends that come to light. I learned how close friends he was with Ringo Starr. Ringo was Harry’s best man for his marriage to Una O’Keefe.

I am especially fond of Jimmy Webb‘s remembrances of Harry Nilsson which I have heard Jimmy Webb recant in stories during concerts. Jimmy Webb was THIRTEEN’s in studio guest last night and he regaled us once more with insight about his dear friend.

The Harry Nilsson biopic caused me to think well when did I first hear Harry Nilsson’s genius?  Harry Nilsson had two hits in the first half of 1969, “One” by Three Dog Night (4/69) and “Everybody’s Talkin’ (From Midnight Cowboy)” 5/69 (written by Fred Neil). Little did I realize that Harry Nilsson had already released three albums by this time.

But the first song of Harry Nilsson’s that I heard was “Without Her” by Blood, Sweat & Tears on their masterpiece recording, Child Is The Father To Man. The song track stood out to me when I first borrowed that vinyl LP from my wife Rosemary when we started dating in February/March 1969.

I spend the night in a chair thinking she’ll be there
But she never comes.
And I wake up and wipe the sleep from my eyes.
And I rise to face another day
Without her …

My favorite animated cartoon musical is  The Point. I was fortunate to see the original broadcast on ABC-TV in 1971. It captivates the music of our heart in vivid imagination. I couldn’t wait to share it with my son when he was growing up and he loves watching to this day 🙂 Interestingly Ringo Starr is the Father/Narrator in the home video release. The music that Harry Nilsson wrote and performed are truly classic statements.

The funniest memory I have about Harry Nilsson occurred one day on the radio. I was a college FM disk jockey at Fairfield University on WVOF-FM 88.5. I was doing my show when I played a set by Harry Nilsson. I had chosen to play, “You’re Breaking My Heart”. I had grabbed the 45 rpm edition not previewing it before I played it. My friend Jeff was getting set up to do the newscast next in the glass booth across from me. Jeff is singing along and we both realize too late its the unedited version.  Next thing you know it hits the airwaves. Jeff’s mouth drops open and he falls off his chair. I never laughed so hard off the air in my life. That moment still makes me laugh when I hear that song 🙂 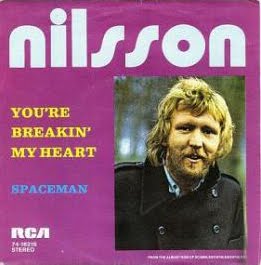