Sandstone is a clastic sedimentary rock composed mainly of sand-sized minerals or rock grains. It serves as a framework grain and is used to support sand as a land mass.

Traffic is analogous to sandstone when it comes to the foundation of rock music. Progressive rock music’s roots can be directly traced to the group. We  owe a world of gratitude to Traffic’s founding members, Steve Winwood, Dave Mason, Jim Capaldi, and Chris Wood for the music they gave us.

Traffic is my favorite English rock group. The music they created appealed to my senses on so many levels. They first permeated my consciousness as folk rockers with their pivotal first two albums. Traffic showed evolution with the next phase building on folk music by adding healthy amounts of jazz improvisation with their comeback smash, John Barleycorn Must Die.

Traffic entered the English rock music scene at the same time as Cream, Jethro Tull and The Yardbirds (just to name a few) in 1967. I discovered Traffic in late 1968 when they released their second recording, Traffic. (See my earlier blog post, Traffic’s Second Studio Recording – Traffic for more details).

My favorite gem on Traffic’s Last Exit (May 1969) was the track “Medicated Goo”. Nonsensical as the lyrics were the music busts a move to this day. 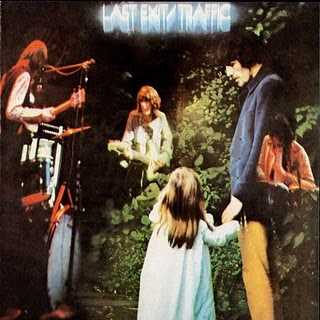 An excellent live recording(Audio and Video) by Traffic is contained on The Last Great Traffic Jam recorded from the 1994 Traffic reunion concert tour.

I have always found the Traffic icon to be compelling. I was never quite sure what it meant or how it was typified. I just know I loved its concentric woodsy nature. I have a leather edition of this symbol which I wore as a hippie necklace in the day 😉

Just this past week I received a surface mailing postmarked from Malta. It was a literature piece advertising the Genesis Publications Ltd., Mr. Fantasy The Lyrics of Jim Capaldi. This specialty book is a true collectors item. The price is very rich for my blood $345 British Pounds, $560 in US Dollars. Mr. Fantasy is in full bound leather, with silkscreen artwork and gold blocking. It is hand-made to order, numbered and signed by Steve Winwood, Aninha Capaldi and Robert Plant. Places it on my Christmas list just in case 🙂