I bristle at the notion that Donald Fagen will soon be releasing his fourth solo album, Sunken Condos, on October 16, 2012. Donald Fagen is one cool cat in my book. I own his first three solo classics, The Nightfly, Kamikiriad, and Morph The Cat. Combined they are considered The NightFly Trilogy. They are superb recordings with engaging musical scales, tasty lyrics, and top flight engineering production.

Sunken Condos builds on that Fagen sound excellence we’ve come to love and respect. It then expands his music vision to the next level of sophistication with new tapestries and stories that entertain our sensibilities.

The nine tracks on Sunken Condos were co-produced by Michael Leonhart and Donald. All but one track, an Ashkenazi recasting of Isaac Hayes‘ “Out of the Ghetto,” are Donald Fagen originals. This thrills me to no end as I am constantly enchanted by his creative genius. Some familiar names from the Steely Dan family of players are on hand for Sunken Condos such as Jon Herington, the Steely Dan horns, Freddie Washington plus we’ll be treated to some new faces. The word is that, from now on, everything Donald Fagen does has got to be funky. Ain’t it cool 😉

The vinyl release is a special collectors edition 2 LP set pressed in 180 gram high performance clear vinyl. I especially like the artwork on the inside sleeves. 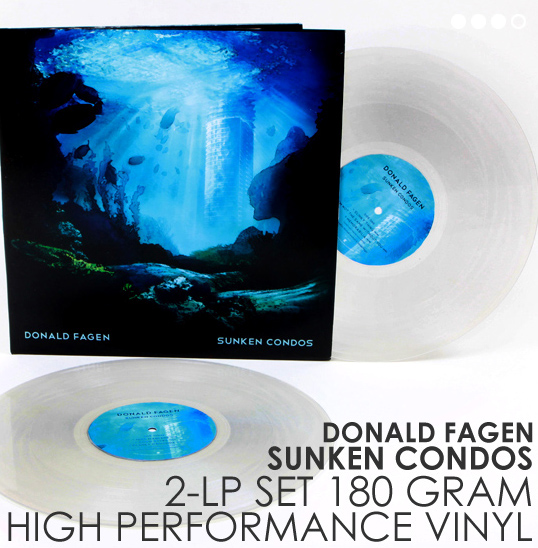 The first track from Sunken Condos has been released, “I’m Not The Same Without You”. It’s available on iTunes.

Here is the video 😉