More great news about The Echo Nest and its music intelligence platform.

According to last week’s press release by The Echo Nest.

The Echo Nest, the world’s leading music intelligence platform, has closed a $17.3 million financing round led by Norwest Venture Partners. Prior investors Matrix Partners, Commonwealth Capital Ventures, Fringe Partners, Jim Pallotta and board member Michael Brown also participated in this round. The Echo Nest plans to use the funds to support continued sales growth, international expansion, and new product development. The company is also announcing major additions to its Fanalytics listener data platform in pursuit of even better understanding of music.

Congratulations to The Echo Nest in securing 17.3 million in additional financial funding. As a result of that achievement efforts can move ahead in two key initiatives for The Echo Nest as the company become strategic to the digital music age.

The Echo Nest is announcing two product enhancements to its Fanalytics, tools which give companies more in-depth understanding of music listeners. One is Taste Profile Similarity, a data service that gives applications and music services the ability to connect like-minded fans within a larger group, even if these consumers don’t like the same band or have some other overt demonstration of their similarities. 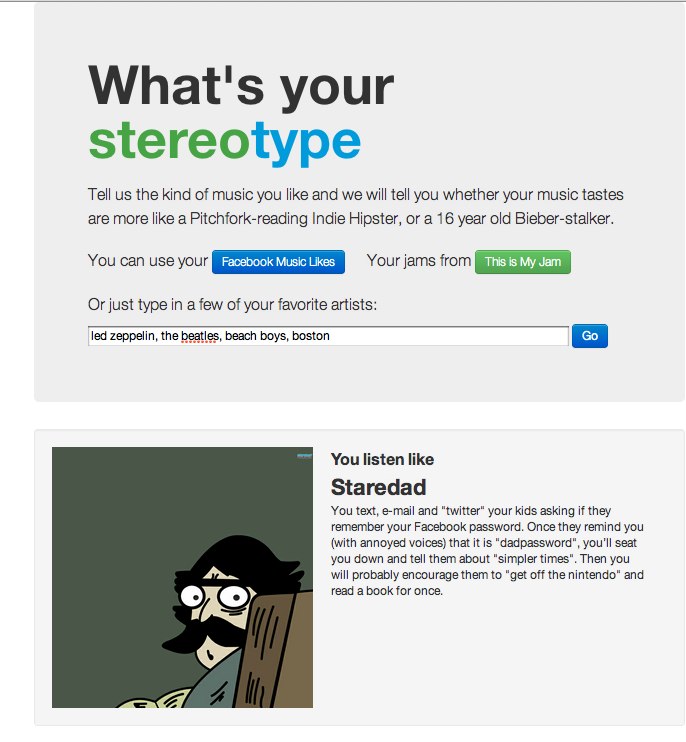 When I tried the What’s your stereotype? app I got this result. 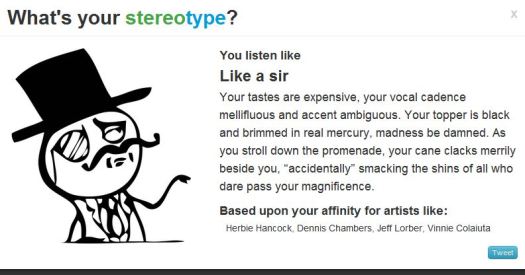 This is an extension of its Taste Profiles, a web service that builds a profile of each listener based on factors like music collection and listening behavior patterns.

The other is the Echo Nest’s affinity prediction capabilities, which it is refining as a way of predicting preferences and psychographic attributes beyond music. One proof of concept app, for instance, determined a predictive correlation between musical activity and political affiliation.

Read Brian Whitman’s (The Echo Nest CTO) blog post “How well does music predict your politics?” to get a better scientific appreciation of affinity prediction capabilities.

2 Replies to “The Echo Nest Moves Beyond Music Discovery”