The music of our heart is in harmony with how music affects our sense of well-being. Music is representative of an era in time that makes us happy and complete. The Zombies were part of such a time, the second wave of the British Invasion bands in the 60s. They created a unique sound led by Rod Argent on keyboards/vocals and Colin Blunstone on vocals that calls to a special place inside every time I hear their timeless hits. (She’s Not There, Time of the Season)

Thankfully, The Zombies continue to perform and they sound fantastic live. We saw The Zombies in 2004 on the first night of their U.S. Tour in Stamford, Ct. It was a magical evening. I was blown away by how crystal clear Colin Blunstone’s vocals were as he sung to us. Rod Argent was warmly genuine as he spoke to us from the stage about the evolution of The Zombies, Argent and their influence on other artists (“Liar” by Argent became a big hit for Three Dog Night …).

What was exciting to witness was how much Rod Argent and Colin Blunstone wanted to interact with their fans after the show. They manned the merchandise booth eager to sell and sign the freshly arrived copies of their first studio album since 1991, As Far As I Can See. They wouldn’t rush you past to keep the line moving. It was an intimate reward to speak with them for a while. 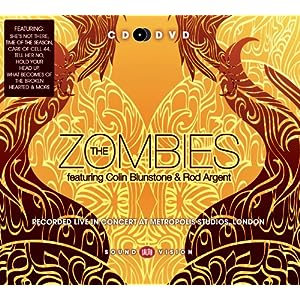 The reason why I am writing today about The Zombies is that they have a new concert CD/DVD package, The Zombies – Live in Concert at Metropolis Studios. Taped in January 2011, the compilation, which includes Zombies hits, interviews and post-show reception footage, will be available on August 7th, or you can pre-order it here.

The Zombies will also be playing at the Mohegan Sun Wolf’s Den on that same day August 7th, 2012. We are looking forward to that engagement, perhaps I’ll buy and have them sign The Zombies – Live in Concert at Metropolis Studios that day. 😉

Be sure to browse over to look at The Zombies Web site. It is well designed, structured by Past, Present and Future content.