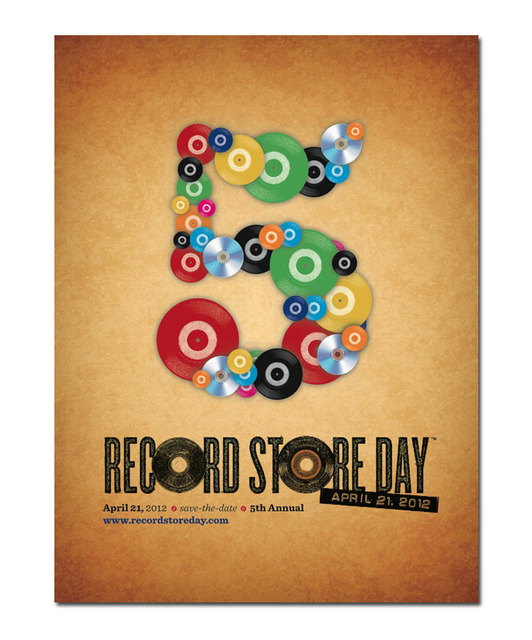 The Official Record Store Day Web site will serve as the announcement and event coordination location for all the details about this great annual event. I look forward to it every year. 2011 saw two Record Store days and that was a very cool surprise.

The only record I have seen announced (so far) for Record Store Day 2012 is the Limited Edition Music Changes The Word Vinyl Box Set from the David Lynch Foundation. It’s a fantastic cause that I intend to support and get more directly involved with. You can read more here.

Originally released in mid-July 2011 via iTunes as DOWNLOAD FOR GOOD, the MUSIC THAT CHANGES THE WORLD, SPECIAL LIMITED EDITION BOX SET is a wonderfully eclectic, star-studded vinyl music compilation benefitting the David Lynch Foundation—a non-profit educational organization founded by iconic filmmaker DAVID LYNCH. The compilation has been re-mastered for vinyl, and includes a previously unreleased bonus track from Sean Lennon’s “Ghost of the Saber Tooth Tiger,” as well as an exclusive new release from Julio Iglesias Jr. via digital download.

“It is my great pleasure to announce the vinyl release of MUSIC THAT CHANGES THE WORLD on Record Store Day,” said Donovan. “As head of the Musical Wing of The David Lynch Foundation Music Label, I wish to thank all the amazing artists who have contributed. From the beginning, when The Beatles and I were writing songs to promote Maharishi’s meditation, it was always my dream to bring all the musical fraternity onto one great label to Promote True Peace. This day has arrived and now the world can know as we knew then, that Change Begins Within.”

The SPECIAL LIMITED EDITION BOX SET features a gorgeous 42-page color book with an introduction by David Lynch. The book is illustrated by Romio Shrestha, who has been called “a modern master of the Indo-Nepali-Tibetan Buddhist traditions of enlightenment art,” and New Jersey artist Davel Hamue. All songs were re-mastered for this project by Gavin Lurssen, a three-time Grammy award winner and one-time Latin Grammy award winner, whose mastering credits include the music of Elvis Costello, Eric Clapton, Alison Krauss and Robert Plant to name just a few. His Grammy’s include mastering for the soundtrack of the movie, Oh Brother Where Art Thou, and for his work on the box set accompaniment to the acclaimed PBS series, Martin Scorsese Presents the Blues. His most recent award, the Latin Grammy, was for the Best Engineered Album, Distinto by Diego Torres. Reuben Cohen is a Latin Grammy award winner whose mastering credits include the music of Bruno Mars, the Far East Movement, Snoop Dogg, Sean Kingston, Common, and Ingrid Michaelson. and Reuben Cohen from Lurssen Mastering. Cohen is a Latin Grammy award-winner who has mastered such artists as Snoop Dogg, Sean Kingston, Common, The Cranberries, Dev, Rob Zombie, and Ingrid Michaelson.

The MUSIC THAT CHANGES THE WORLD, SPECIAL LIMITED EDITION will also include a digital version of “Meditation, Creativity, Peace”, a compelling new documentary film featuring exclusive, candid footage from David Lynch’s 16-country tour around the world when he spoke to government leaders, film students, and the press during 2007 and 2008. (For additional information, and link to trailer, “Meditation Creativity Peace:”) click here.

MUSIC THAT CHANGES THE WORLD is being distributed to retail stores across in the U.S. and globally by Altavoz Distribution, a full-service distribution company committed to leveraging the sale of music and entertainment products to support good causes and make a difference. The Box Set will be available in stores as part of Record Store Day, on Saturday, April 21, 2012. Since it’s start in 2008, Record Store Day has been instrumental across the globe in bringing millions of fans to record stores on one day each year. Only 2,500 units of the Box Set will be released worldwide, makingMUSIC THAT CHANGES THE WORLD an instant collector’s item.