I can happily report that at long last I got to see Burton Cummings, of The Guess Who and singer/songwriter fame perform live. I have been tracking his concert appearances in the hope of seeing him live for a couple of decades now.

I literally stumbled upon the fact that Burton Cummings was playing Mohegan Sun Wolf Den. I discovered this fact the night I waited on line to see Johnny Rivers perform. It was a major discovery I was jazzed to find. I have been searching high and low for a Burton Cummings concert date on the Web, with PollStar for years.

For those of you who may not be familiar with the Mohegan Sun Casino, Wolf Den it is a venue in the middle of the Casino of the Earth. It resembles a huge tented alcove from the outside. Inside it is a nightclub in a semicircle with a rock covered stage area. Its as if you are in the mountains somewhere watching an act perform. The amazing part of the acoustics is that when the musics playing you can’t hear the whir and bing of the slot machines at all 😉

The shows are free to the public, you just have to arrive early for a seat. I typically get there three+ hours before they let the audience in at 6:30 for an 8 o’clock show. Its a long time to stand but the music is very worth it as are the caliber of artists they bring to the Wolf Den.

It was a busy night at Mohegan Sun on the fourth of July weekend. Def Leppard and Heart were performing at the Arena. We hope to see Heart someday as a headliner act. Yes, they are on my bucket list 😉

I can now draw a line through Burton Cummings on my bucket list. It was my expectation that he would perform hits from The Guess Who period of his career and he didn’t disappoint us at all. Last night was the opening night of Burton Cummings Your Backyard U.S. Tour. He and his band the Carpet Frogs played a great set of music as the set list indicates below.

Burton Cummings was enthusiastic with the reception he received from the Wolf Den crowd. He said something interesting to all of us. He stated that he wasn’t sure if he should tour the US with there already being a band that calls themselves The Guess Who. I am glad he reconsidered that option and played his heart out for us last night.

I loved that Burton Cummings performed Rosemary’s favorite Guess Who single, “Undun” as he did mine, “These Eyes”. Burton Cummings has a signature voice and he is one of, if not my favorite vocalist of all time. Granted he’s 63 now and he was 20 when he had his first two gold records (Laughing and These Eyes both from the same single…). He lowers the octave range of his voice to compensate for time and his voice sounded great last night let me tell you.

I am including some pictures I took last night with my Apple iPhone. The balance of the photographs are available here on Flickr. I need to get a better smartphone camera, maybe when the iPhone 5 comes out 😉

Sent from my iPhone 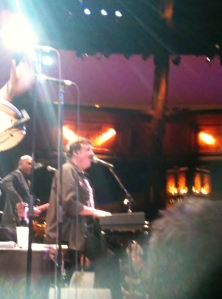